I’m Indira Gandhi’s daughter-in-law, not scared of anyone: Sonia Gandhi 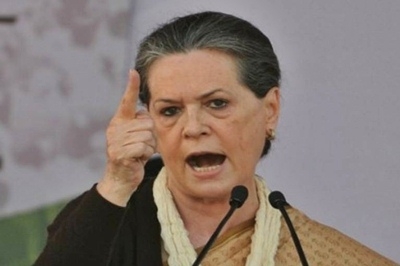 New Delhi : Congress president Sonia Gandhi on Tuesday stood her ground over the charges being levelled against her in the National Herald case by senior Bharatiya Janata Party (BJP) leader Subramanian Swamy, and said that she has no reason to be scared of anyone.

“I’m daughter-in-law of Indira Gandhi, I’m not scared of anything. Why should I be scared?,” she said here.

When asked if she smelled a political vendetta in the case and that she was being targeted by Bharatiya Janata Party (BJP), she replied saying, “I leave it to you to judge.”

However, the BJP has vehemently slammed the charges of vendetta by the Congress, saying the violations have been highlighted by the court and not the ruling party themselves.

“The National Herald case is under court’s jurisdiction and the government has no role to play in it,” Union Minister of State (Independent Charge) for Skill Development and Entrepreneurship Rajiv Pratap Rudy told the media here.

Meanwhile, Sonia Congress vice president Rahul Gandhi have been asked to appear in court on December 19th at 3 p.m., which is the earliest possible date given by the court.

Expressing content towards the Patiala court’s decision, Swamy today said that he is completely satisfied with development and added that he has given a pledge to the court to make sure that Sonia and Rahul and all other accused in the case are present in the next hearing.