Vij offered an "impartial" inquiry into the "entire Karnal episode" as farmers continued their dharna outside the district headquarters for the third day, demanding action over the August 28 lathicharge

Chandigarh: Haryana Home Minister Anil Vij on Thursday said his government is ready for a probe into the last month's clash between farmers and police but warned that farm leaders too could face action if they're found to be at fault.

Vij offered an "impartial" inquiry into the "entire Karnal episode" as farmers continued their dharna outside the district headquarters for the third day, demanding action over the August 28 lathicharge.

Their main demands centres around the suspension of then SDM Ayush Sinha, who was caught on tape allegedly telling policemen to "break heads" of farmers if they cross the line.

The minister made it clear that "nobody can be hanged without a probe just because someone demands it".

"We are ready for an impartial probe but this will not only be related to (former Karnal) SDM (Ayush Sinha), but the entire Karnal episode. In this (probe), if farmers or their leaders are found guilty, then whatever action is deemed fit will be taken," Vij told reporters in Ambala.

The minister, however, said, "Only genuine demands (of farmers protesting in Karnal) can be accepted." "We cannot hang anyone because someone says so. Is the country's IPC (Indian Penal Code) different and the farmers' IPC different? It cannot be like this and punishment is always given as per the offence committed. To find out the offence, a probe has to be conducted," said Vij referring to their demand of suspending the IAS officer.

About the farmers protesting in Karnal, Vij said everyone has the right to hold a protest in a peaceful manner.

"Farmers are holding an agitation in Karnal which is their democratic right," said Vij, while adding, "Our officials are regularly holding talks with them. Dialogue is an integral part of any democracy".

Meanwhile, according to a statement, Karnal Deputy Commissioner Nishant Kumar Yadav while referring to the demand of action against the officials said, "The matter is being investigated by orders of the chief secretary. Appropriate action will be taken after receiving the report." The DC further said if farmers want to participate in the investigation process, they are welcome. If they want to get the matter investigated at some other level, then that demand can also be considered, he said.

The DC also appealed to farmers to cooperate in finding a solution through a dialogue. The avenues of dialogue with farmers have been kept open by the administration, said the DC. The district administration is continuously appealing to them to end the dharna, the DC said, adding that the law and order in the district is fine.

The Samyukt Kisan Morcha (SKM) spearheading the farmers' stir against the Centre's farm laws had earlier said a murder case should be registered against Sinha over his alleged remarks.

Farmer leaders on Thursday said they will be holding a meeting on September 11 in Karnal to decide the future course of action.

Farmer leader Jagdeep Singh Aulakh told reporters in Karnal that they stop protesting only when a case is registered against the IAS officer.

He said a "big decision" will be taken soon if the government does not agree to their demand.

"If the government does not accept our demand, we will take a tough decision and block entire Haryana," Aulakh said.

"The Haryana government has been exposed for its anti-farmer agenda. It tried to disrupt the farm movement from the very beginning and has filed numerous cases against farmers and farm leaders. Yet, it promotes and supports the officer who ordered to break heads of farmers and refuses to take action against him," an SKM statement said.

"The SKM questions the brazen efforts by BJP-JJP government in protecting the official," said the statement.

Another round of talks between Karnal district administration officials and farmers had failed on Wednesday after which the protesters said they will continue their sit-in "indefinitely" at the district headquarters.

Meanwhile, into the third day of the dharna, protesters are staying put at the gate of the mini-secretariat complex in Karnal, though farm union leaders have said officials and the public won't be stopped from entering it.

Inspector General of Police of Karnal Range, Mamta Singh, along with Superintendent of Police Ganga Ram Punia and other officials took stock of the situation at the protest site on Thursday.

Farmers have set up tents in front of the mini secretariat.

Shiromani Gurdwara Prabandhak Committee, the apex religious body of the Sikhs, some volunteers and nearby gurdwaras are among those who are serving "langar" to farmers. 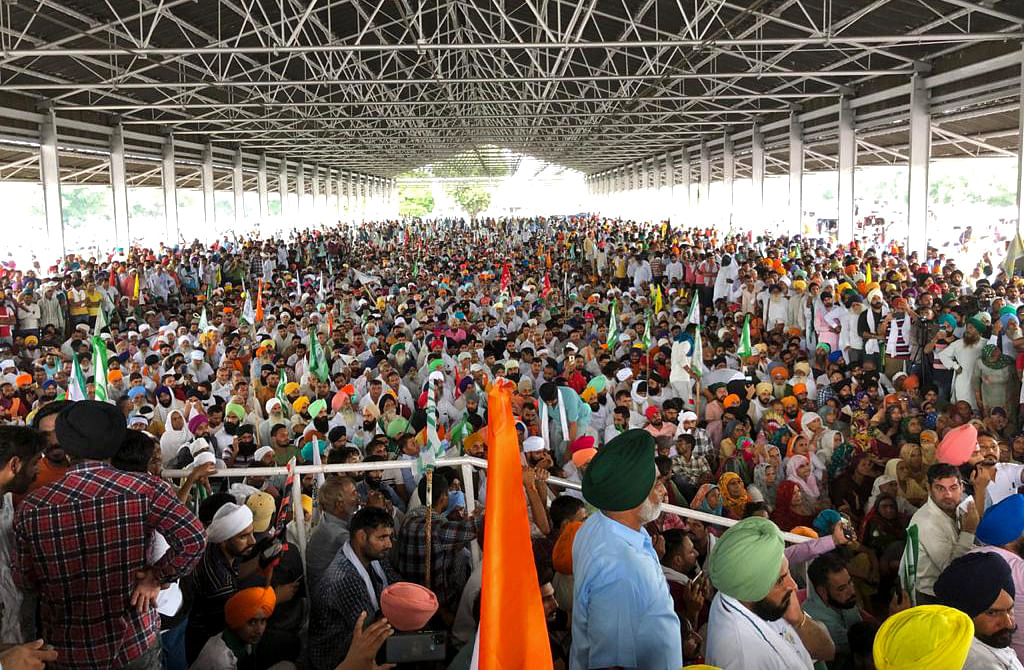