The nation on Thursday was fighting an invisible menace – rumour mongering, which has led to a virtual exodus of people from the Northeast and Tibet. The trigger for the exodus was inflammatory SMSes warning people of North East of attacks. 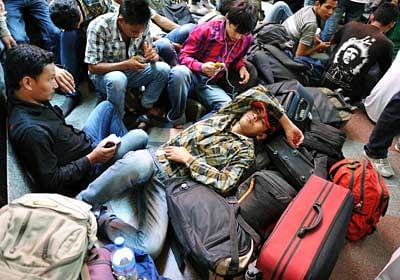 The government tried to grapple with the anonymous menace by making appeals: Prime Minister Manmohan Singh made one asking the state governments to restore trust and harmony and ensure that no one is targeted due to rumour mongering.

Both Singh and Union Home Minister Sushil Kumar Shinde spoke with Karnataka Chief Minister Jagdish Shettar and asked him to instill confidence and provide special security to people from NE region and Tibet.

But apart from issuing advisories, the Home Ministry, despite all resources at its command, was unable to identify the source of SMSes that triggered the rumours.

In a mass exodus, making it one of the worst Independence Days, fear- struck students and professionals continued to flee Karnataka, Andhra Pradesh and Maharashtra for the second day on Thursday.

Thousands flocked to railway stations in Bangalore, where people of Northeast have been given an August 20 deadline to leave the city or face death.

Over 5000 people from NE, who form the backbone of infrastructure projects and security agencies in the city and a large number of students, made a desperate bid to get out of Bangalore, once touted as a safe city.

A worried Chief Minister of Assam, Tarun Gogoi, spoke to Chief Minister Jagdish Shettar asking him to provide security to the people from Assam and the Northeast. Prodded by the telephonic calls of the Prime Minister and Union Home Minister, Shettar held a high- level meeting and asked law- enforcing agencies to form special teams to ensure security cover for the targeted groups. He claimed that not a single attack has taken place in the state. There is no need to panic. ‘What you have heard is rumours. You people have lived here for many years and have become one among us. Leaving the state is not good news. We will provide you full protection,’the chief minister said.

As a confidence- building measure, the police have been told to beef up security around areas where northeast people reside in large numbers.

‘Patrolling the area will be done. This apart, security will be provided to the properties of those who have already left Bangalore. Police will be holding peace committee meetings involving all sections of the society,’Shettar said. Thousands were still at the city railway station eager to catch the earliest available train to leave the City. A worried Deputy Chief Minister R Ashoka, who handles Home, rushed to the railway station along with the city police commissioner to ask people to stay back as they are safe. Addressing them on the railway public address system, he said: ‘Nobody can touch you. The government will give protection. You need not have any fear or apprehension.’Despite these appeals, the panic and rush to return home was unabated.

Members belonging to various organizations — including the RSS — visited the railway station and tried to convince the fleeing people that Karnataka was much safer than Assam.

The trigger was a rumour that threatened of large- scale violence against the people of NE after the period of Ramzan. Rumours had it that the people from NE have been given August 20 as deadline to leave the city or face death, more precisely, beheading. Apart from this, a Tibetan was stabbed in Mysore and is in a critical condition. This too spread panic.

The Railways had to press in two special trains in addition to the regular train leaving for Guwahati as the city railway station was bursting at the seams. Several people of North Eastern origin have confirmed being threatened over the last couple of days. A native of a northeastern state who works at Bengaluru International Airport told a local newspaper that he was verbally threatened by a passerby when he was returning home from work a few days ago. The stranger ran into him at a road crossing and asked him to ‘leave’Bangalore.

‘He apparently mistook me for an Assamese and said I should leave the city immediately. Things will otherwise be difficult,’he said. One of his friends also received a similar threat. ‘A man walked up to my friend and asked him to go away immediately. Else, his head will be chopped off.’At a hurriedly convened press briefing, Inspector General of Police Lalrokhuma Pachau, who hails from Northeast, appealed to people not to leave the city, and sought to dispel their fears. He explained that rumours were spread by word of mouth, via text messages and social networking sites such as FaceBook.