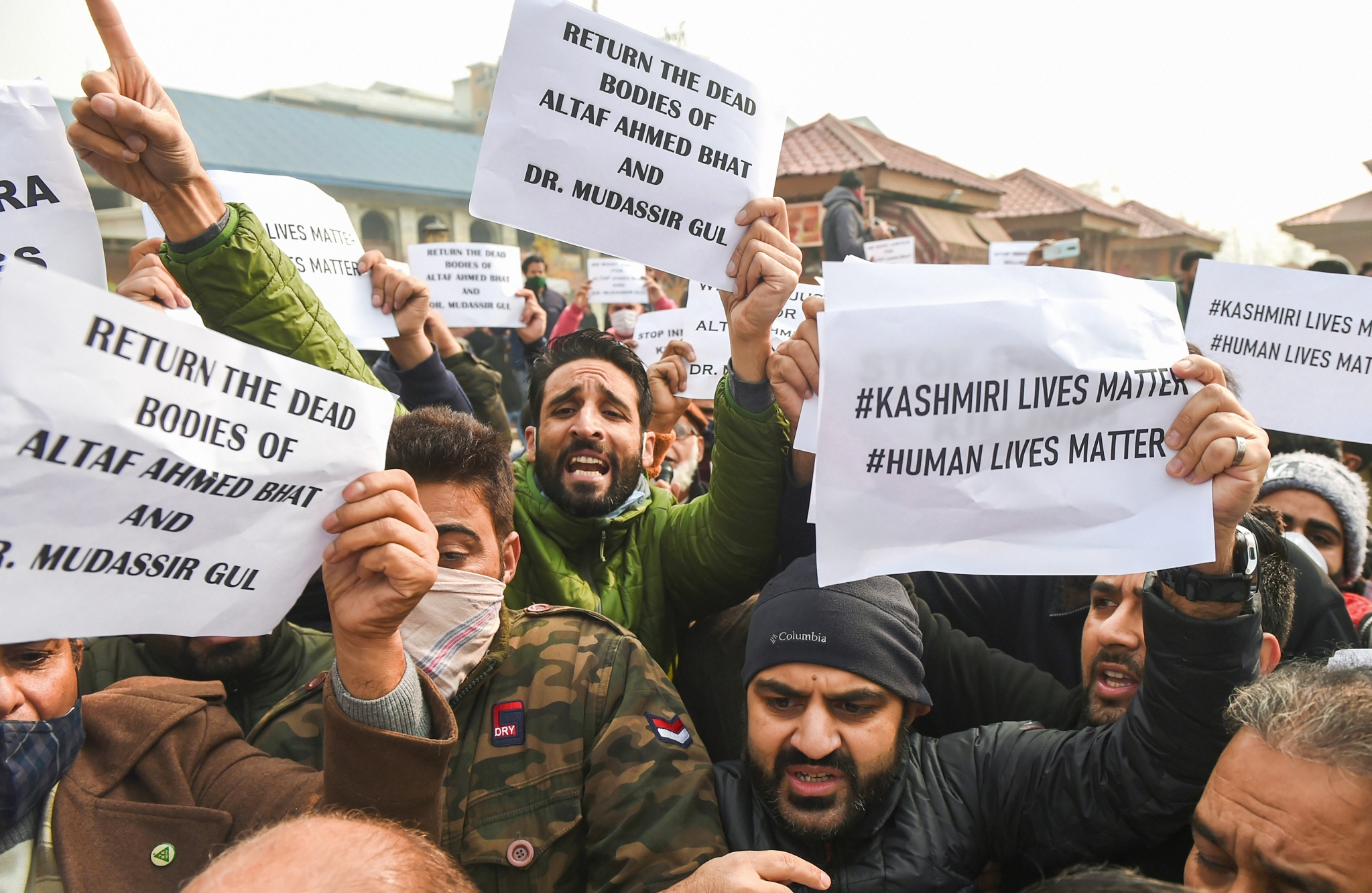 Srinagar: Leaders and workers of J&K Peoples Conference hold placards and shout slogans during a protest demanding a probe into the killings of civilians Altaf Ahmad Bhat & Mudasir Gul and the return of their bodies, in Srinagar, Thursday, Nov. 18, 2021. The civilians were killed during an encounter between security forces and militants at Hyderpora on Monday. | (PTI Photo/S. Irfan)

The bodies of two civilians killed in Hyderpora, Jammu and Kashmir, have been handed to their families on Thursday evening, news agency IANS quoted official sources as saying.

The bodies of Altaf Ahmad Bhat, the building owner where the encounter took place and that of Dr. Mudasir Gul, who was running a call centre in a rented floor of the same building, were earlier exhumed in presence of their family members in Handwara area of north Kashmir, the sources added.

Bhat and Gul were among the four people who died in an anti-terror operation at a commercial complex in Srinagar on Monday.

According to India Today, they were buried along with two other persons who were killed in the encounter.

However, according to NDTV, their families have claimed that they were killed in cold blood by security forces and the police refused to hand over their bodies, citing law and order problems.

Meanwhile, the Jammu and Kashmir government has ordered an inquiry by Srinagar ADM into the encounter, reported news agency ANI.

"I demand a judicial inquiry into the Hyderpora encounter to find out how and why people were killed. It is a case of police and not of Army. There should be a judicial inquiry under a High Court judge," the Congress leader told reporters on the sidelines of a public rally held in Kathua today.

"While I respect the police, and I have been a great admirer of the Amry and security forces, but at the same time, we should ensure that such things do not happen. That too in Srinagar city. If such thing takes place in the capital then people will raise eyebrows on what must be happening in the hinterland," he added.

Former Jammu and Kashmir Chief Minister and National Conference leader Omar Abdullah had staged a protest in Srinagar and had demanded the bodies of two civilians killed in Hyderpora encounter to be returned to the families for their last rites.

Speaking to the media, Abdullah had said, "I have to stage this protest to express my anger and helplessness." "We are demanding the bodies of those civilians who were killed in the Hyderpora encounter and have not been returned to their families for the last rites," he had said.