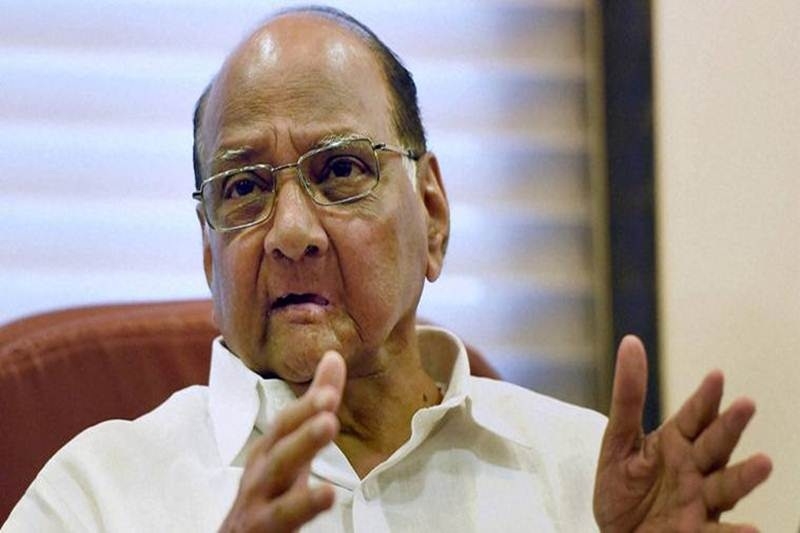 Mumbai: NCP chief Sharad Pawar was in for a surprise when a half-naked man turned up on the stage of an election rally he was addressing at Niphad here in Maharashtra ahead of the fourth phase polling on April 29. The man, identified as Krushna Dongre, appeared shirtless on the dais and is seen walking towards Pawar, who was busy addressing the rally, with a piece of paper in his hand.

The incident was captured on TV cameras installed to cover the public meeting. On the stage, Dongre told Pawar he had been protesting against the government half-naked over some land issue for the past two months. The government, he alleged, has been trying to quell his agitation. Dongre also submitted a memorandum to the former Union agriculture minister, who asked him “not to worry”.

The man said he would continue to protest halfnaked till the BJP-led central and state governments are ousted. The NCP president said during his speech later that Prime Minister Narendra Modi had addressed a rally in the Dindori Lok Sabha constituency last Monday, but “did not speak much about the issues relating to onion and agriculture”. “There is nothing new in it. It is this (apathetic) approach this (the government’s) leadership holds…will not sit quiet till we oust this Modi and bring in a pro-farmer government,” Pawar told the gathering. The NCP leader further slammed the NDA government over “agrarian crisis” in the country and charged it with being apathetic towards the plight of farmers. “The BJP government hurt the transactions of farmers through demonetisation and committed the sin of pushing them into crisis,” the Maratha strongman alleged.

Pawar said re-electing the BJP to power would mean handing over rein to those few whose interest will allegedly be protected under the NDA major’s watch. Meanwhile, Maharashtra NCP president Jayant Patil — who too addressed the Niphad poll rally — later tweeted about the incident involving Dongre. Patil took a dig at Modi, alleging the prime minister addresses rallies only after ensuring arrest of farmers (anticipating protest by them). “Seeing for the first time a prime minister who is so afraid of farmers.

Our farmer Krushna Dongre narrated his plight to Pawar Saheb. The people will not keep quiet until the BJP government is ousted,” he said on the micro-blogging site. Addressing the poll rally in Pimpalgaon in the Dindori constituency, a region known for onion production, Modi had said his government was trying to increase onion storage capacity and reduce farmer expenses on its transportation. He had also claimed the Congress tweaked crop prices to benefit middlemen. “I have fought a battle against these middlemen,” Modi had added.