The ongoing struggle for formation of the state government seems to be entering its last leg, and opposition leaders have hailed the resignations
FPJ Web Desk 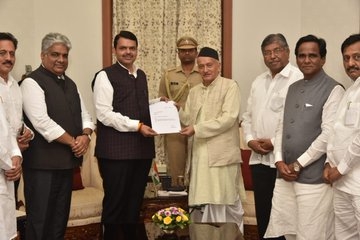 The ongoing struggle for formation of the state government seems to be entering its last leg, and opposition leaders have hailed the resignations.

West Bengal Chief Minister Mamata Banerjee said, "SC has upheld the spirit of the Constitution, this is a special news on Constitution Day".

"The turn of events have put the role of President under the scanner: Congress' spokesperson Manish Tewari said.

Hitting out at the BJP, senior Congress leader KC Venugopal called the resignation a "victory of constitutional democracy".

Speaking to ANI Venugopal said, "This is a victory of constitutional democracy. They thought through horse-trading they can make government in the state."

Lashing out at the top brass of BJP sitting Delhi, he said, "This is not only a failure of Fadnavis but also a slap on faces of their masters sitting in Delhi."

"This is victory of the people...the people of Maharashtra have deflated the arrogance of BJP leaders," NCP chief spokesperson Nawab Malik said.

In a series of tweets, Congress' chief spokesperson Randeep Surjewala posed questions to Prime Minister Narendra Modi and Home Minister Amit Shah, asking "why such a spectacle of democracy was created in Maharashtra?"

Minutes after Devendra Fadnavis' announcement that he is resigning, former Maharashtra chief minister and Congress leader Prithviraj Chavan said he has requested Koshiyari to accept it and invite the Shiv Sena-NCP-Congress alliance led by Sena chief Uddhav Thackeray to form the government.

Claiming that the lack of numbers of those "who kidnapped the people's mandate" stands exposed with the developments, Surjewala said,"it is now clear that 'Chanakyaniti' (political strategy) in BJP means abduction of democracy."

"Devendra Fadnavis and Ajit Pawar should apologise to the people of Maharashtra. Their government was based on lies and defections and fell like a house of cards," he said.

Asserting that there is a need to ensure accountability of the Prime Minister Modi and Home Minister Shah, Surjewala also asked why was the governor used as a puppet and why did they hurt the stature of the President.

"Why was the country's cabinet paralysed? Why was the naked dance of defections and horse trading? Why was a minority government formed drama done of having majority for so long? Why corruption cases were taken back?Why was the Constitution torn into shreds?" Surjwala asked.

At a press conference, Congress spokesperson Manish Tewari said the turn of events in Maharashtra has also put the role of the President under scanner but did not elaborate.

"We hope the governor will fulfil his duties and invite 'Maha Vikas Aghadi' of Sena-NCP-Congress to form a stable government in Maharashtra...The Governor sheds his RSS-BJP cloak," Tewari said.

"The damage they (BJP) has done to our Constitution and the highest offices in the country, for their sole bid to grab power illegally, will take decades to heal," said senior Congress leader Ahmed Patel, who was at the centre of the Congress-NCP-Sena negotiations for alliance.

Many BJP leaders also took to Twitter to express their opinions on the resignations.

You miss hundred percent of the shots you don’t take.