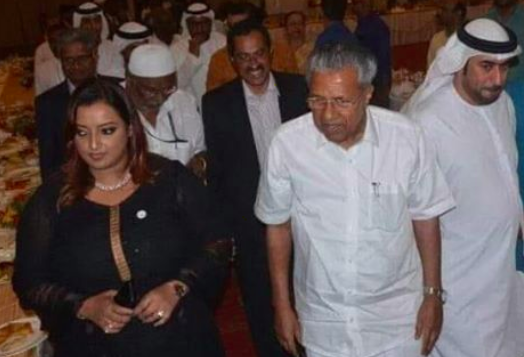 In what could spell further trouble for Kerala Chief Minister Pinarayi Vijayan, gold smuggling case prime accused Swapna Suresh has alleged that a packet of foreign currency was sent to him while he was on a visit to the UAE in 2017, through a diplomat of its Consul General's office here.

Her allegation came in response to a show cause notice issued by the Customs to her on the issue of illegal export of dollars abroad.

The show cause notice, dated July 29 and surfacing in the media on Wednesday, has statements of Swapna Suresh and others. According to it, Swapna, asked who were all these senior politicians she has accused, replied that present chief minister Pinarayi Vijayan and then Assembly Speaker P Sreeramakrishnan had sent foreign currency to the UAE through Ahmed Al Doukhi, a diplomat of the Consul General Office, and Consul General, Jamal Al Zaabi, respectively.

"When Swapna was asked how these politicians sent foreign currency through diplomats, she replied that in the beginning of 2017, she got instructions from the Consul General to call (Vijayan's then Principal Secretary) M Sivasankar and to ask whether any arrangements could be made for Chief Minister's arrival at UAE, that she had called Sivasankar and he told her to try to make necessary arrangements, if possible, but they were also trying to make arrangements through the Indian Embassy in the UAE, that she agreed and did the necessary things."

"Next day, Sivasankar called her and said there was a very important packet that had to be sent to the UAE to Chief Minister, who had reached the UAE on the previous day, without any hindrance and delay. She spoke to the Consul General and told him about the requirement and the CG told her that Ahmed Doukhi could be sent to the UAE for that purpose. She asked Sarith (PRO) to contact Sivasankar and to collect the packet and deliver to the diplomat Ahmed Al Doukhi, for carrying it to the UAE."

"Accordingly, Sarith collected that from somewhere and he delivered it to Ahmed Al Doukhi. She knew that Ahmed Al Doukhi was sent to the UAE by the Consul General only to hand over the packet to the Chief Minister. Later, Sarith informed her unofficially that he had brought the said packet to the Consulate for screening it in the X-Ray machine and that the packet contained currency," reads the statement.

Swapna Suresh previously worked in the UAE Consulate office here and Sarith was her colleague.