The colony has a majority of Msulims however both communities joined in the celebrations to showcase unity.

Amid the Idgah ground dispute in Karnataka’s Hubballi and Chamrajpet, people from Muslim and Hindu communities came together to celebrate Ganesh Chaturthi in Mandya District as the ten-day festival began today.

According to India Today report, members from both communities came together at Beedi Colony to worship Lord Ganesha. The colony has a majority of Msulims however both communities joined in the celebrations to showcase unity.

Meanwhile, Sri Ram Sene chief, Pramod Muthalik, and his supporters were seen holding pictures of Savarkar and Bal Gangadhar Tilak during the celebrations at Idgah ground in Karnataka’s Hubbali.

The municipal corporation had granted permission to celebrate Ganesh Chaturthi at Idgah ground. However, there were restrictions on not using any controversial posters.

Despite restriction orders, Pramod Muthalik was seen holding a picture of Savarkar and Balagangadhar Tilak in the pandal. The Karnataka High Court on Tuesday allowed the celebrations of Ganesh Chaturthi festivities at Idgah ground in Hubbali.

The decision came after the Waqf Board raised objections to the celebration and procession of other religions on their land.

For the next three days, the idol of Ganesha will remain in Hubballi Idgah ground as per the permission given by the Hubballi-Dharwad Municipal Corporation (HDMC), which was upheld by the Karnataka High Court.

The High Court on Tuesday allowed organising Ganesha Pooja and accordingly, Muthalik installed Ganesha idol under a pandal in Hubballi early in the morning.

However, the apex court disallowed Ganesha Pooja at Idgah Maidan in Bengaluru by ordering a status quo.

A Hindu Janajagruti Samithi member said, "Throughout the next three days we will keep conducting Bhajans at the Pandal (at Hubballi)." 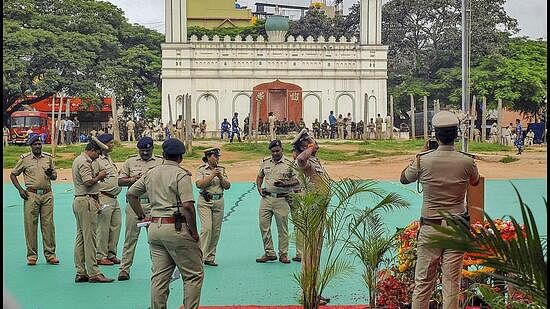