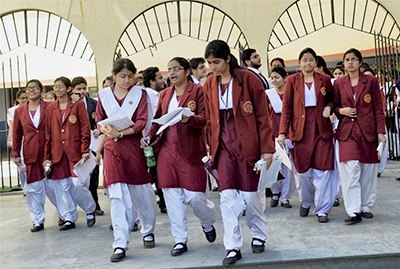 Four student associations including Left wing Student’s Federation of India(SFI) have written to West Bengal Governor condemning the Central BJP government’s decision to delete subjects like Demonetization, Secularism and Federalism from the CBSC syllabus. The student organizations have asked the Governor to intervene in order to protect the basic ethos of the Constitution.

“The recent deletion of certain portions from CBSE syllabus in school education is distinctly alarming as the subjects deleted are extremely important for the development of basic foundation of the students. For example, ideas on Demonetization and GST, ideas on Federalism, Secularism, Nationalism, Democracy, Social Movements, Partition, Citizenship, Human Rights, Gender Students and Food Security have been struck off from IXth and XIIth standard syllabus. This is a huge blow to an education system that aims to form a rational mind,” read the letter sent to West Bengal Governor Jagdeep Dhanker.

This comes three days after West Bengal Chief Minister Mamata Banerjee objected to the Ministry of Human Resource Development(MHRD) on the same issue. In her tweet Mamata had expressed her displeasure saying, “Shocked to know that the Central Govt. has dropped topics like Citizenship, Federalism, Secularism and Partition in the name of reducing CBSE course during #COVIDcrises. We strongly object to this & appeal @HRDMinistry, Goi to ensure these vital lessons aren’t curtailed at any cost.”

The deletion was done by MHRD in a bid to reduce the CBSC syllabus for classes 9th to 12th by 30% to make up for the academic loss caused by the pandemic which led to the closure of schools. Class 11 students can heave a sigh of relief as some heavy topics will be dropped from the political science curriculum for the academic year of 2020-21. But opposition parties question the reason behind leaving out these specific topics which shape the basic understanding for the youth. In addition to this, sub-sections like ‘Why do we need Local Governments’ and ‘Growth of Local Government in India’ have been removed.

While schools are conducting online classes, completing the syllabus is a task for most schools affiliated to various boards. The justification of shedding off portions of the curriculum to exclude certain topics however has not failed to raise questions on a political motive behind the decision.