Floods, landslides cut off parts of Kerala amidst widespread destruction, loss of life due to heavy rains 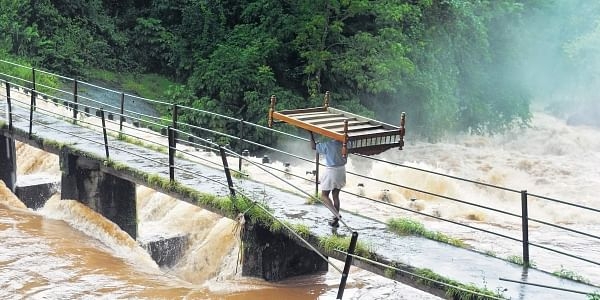 Incessant rain under the spell of cyclonic formations in both the Arabian Sea and the Bay of Bengal have wreaked havoc in Kerala.

Several people are missing and already six have been counted dead. Many of them are feared to be buried in the mud and debris.

Shutters of several dams, which are filled to capacity, have been raised to ease pressure, which has resulted in several rivers overflowing and inundating low-lying areas in their vicinity.

Surging flood waters have uprooted trees and swept away houses, while landslides have cut off three separate places in Kuttikkal town of Kottayam and Kokkayar in Idukki from the rest of the state. Scenes of houses and vehicles being away by the gushing torrent are emerging from different parts of the state.

Television images of landslides and flood waters breaching bridges and embankments are reminiscent of the 2018 deluge. The fury this time has occurred mostly in areas that were unaffected by the previous devastation.

The landslide in Kokkayar, a high range settlement of about 100 families, occurred at around 11 am, but the outside world came to know about the tragedy only in the evening. Seven people, including four children, are believed to be buried in slush and mud.

Rescue teams were unable to reach the affected areas as roads have caved in several parts of the state. Airlifting is probably the only available option, for which Navy has been alerted and teams have set out for the affected area.

However, given the poor visibility at night-time, and rains continuing in several parts of the state, airlifting will have to wait till morning. Teams of the National Disaster Relief Management Force have also been deployed, but they are mostly stranded at different places.

Army units are also on the job and a team has reportedly managed to reach Kanjirappally on way to the disaster sites.

An emergency meeting convened by chief minister Pinarayi Vijayan reviewed the situation and ordered rescue operations on a war footing. The opening of colleges and higher institutes of learning has been postponed and Sabarimala, which was to open for pilgrimage on Sunday, coinciding with the first day of the Malayalam month Thulam, has been closed.

Similarly, popular tourist centres such as Gavi in Pathanamthitta district and Athirappally and Vazhachal waterfalls have been closed.

Evacuation efforts are under way on the banks of all major rivers, which are in spate. However, the risk of Covid has further hampered operations as the protocols have to be followed.

The rains are expected to continue for another day and the focus is likely to shift to the northern districts on Sunday, where heavy showers have been forecast. The cyclonic formation is expected to weaken in a couple of days.