Thousands of farmers, especially from Punjab and Haryana, have been protesting at Delhi borders for more than three weeks.
PTI 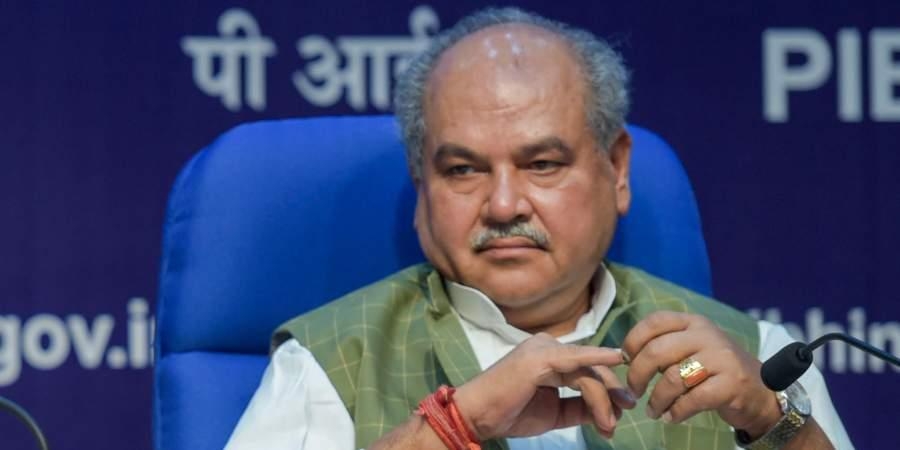 New Delhi: The government is hopeful of resolving farmers' agitation against three new farm laws before the new year and is continuing its informal dialogue with various groups to diffuse the crisis, Agriculture Minister Narendra Singh Tomar has said amid formal talks remaining deadlocked with protesting unions refusing to accept anything less than the repeal of the Acts.

The minister said the Modi government is committed to address all genuine concerns of the farming community and it is willing to resume formal talks anytime, but asserted that there was no point talking to those "shooting from peasants' shoulders".

He put the blame on opposition parties for misleading the farmers and accused them of changing their stance on the reform process and politicising the issue.

In an interview with PTI, Tomar -- who is leading the negotiation with about 40 farmer unions along with Food Minister Piyush Goyal and Minister of State for Commerce Som Parkash -- asserted that the three new farm laws are beneficial for farmers and the government is ready to give a written assurance that the minimum support price (MSP) and mandi system will continue.

Thousands of farmers, especially from Punjab and Haryana, have been protesting at Delhi borders for more than three weeks. At least five rounds of formal talks have been held between the three Union Ministers and 40 farmer unions to break the deadlock, but the unions are demanding complete rollback of the central laws.

"Informal talks are going on. I am hopeful of some way out," he added.

"The matter is sub judice. After the court's order, we will study and take a call... We will wait for the court's direction." Farmer unions, who are concerned about peasants, should raise problems of the farming community so that the government can find a solution, the minister said and asked unions not to stress upon repealing these legislations which have been enacted for the benefit of farmers.

On farmers' unions asking the government not to hold "parallel talks" with other groups and "malign" the protesting farmers, he said, "Farm leaders, who are concerned about the welfare of farmers, should discuss peasants' problems. Why should it matter if the acts are repealed or not?" The government can consider changes to the laws if they convince successfully the clause by clause objections, he said.

When asked on his recent remark that he would engage with "genuine" farm leaders, the minister said, "When I say genuine, I mean those who are really concerned about farmers. There is no point talking with those who want to shoot from the shoulders of farmers".

The government is there to resolve the farmers' problems but unless the specific problems are not told, how can the government offer solutions, he said.

Asked how the government plans to give minimum support price assurance, Tomar said: "We will give in writing that till date the way MSP was continuing will continue in future as well. No one should have doubt on this".

The MSP system is an administrative decision and there cannot be a law for everything, he said.

"To run the entire country, there are laws. Under laws, there are rules. There are also administrative decisions. Can there be doubt on the government's decisions? Till date, MSP was in operation. Was it under any law?" he added.

Noting that when intentions are right, solutions will definitely emerge, Tomar said the Modi government has enacted the three farm laws with clear intention and the outcome will also be good.

Asked if the farmers' issue will be resolved before 2020, he said, "Yes. I have full hope... Everyone has their own agenda. My agenda is 'Kisan'. Tell me which provision of the farm laws are hurting farmers and convince me. We are ready for discussion".

Several protesting leaders have threatened to step up their agitation and have said they are prepared to celebrate the Republic Day next year with their own tractor rally on Delhi borders.

British Prime Minister Boris Johnson will be the Chief Guest at the Republic Day function at Rajpath in the national capital on January 26, 2021.

On Akali Dal's charge that BJP was real 'Tukde-Tukde gang' and wanted to divide Hindu-Muslim and now Hindu-Sikh, he said: "The political parties should not do politics in the name of farmers. These are the same parties which supported these reforms during elections..." "In the Congress election manifesto for the 2019 general election, in Punjab's assembly poll manifesto, be it Congress, Akali Dal or AAP, all have talked about reforms. Now they are changing their stand," he said.

Asked if the protest is anti-Modi or there are genuine concerns of farmers with the laws, Tomar said: "In the protest, there are farmers. As agriculture minister, I am looking at them as farmers. We are holding discussions from an agricultural point of view. My effort is to speak to farmers' leaders so that we are able to resolve their problems".

In the previous five rounds of talks, he said the government asked the unions' leaders to share their objections on provisions of the acts, but they could not share clause by clause concerns and therefore the Centre sent a draft proposal suggesting few amendments.

On Thursday, Tomar wrote an eight-page open letter to farmers, accusing the Congress and other opposition parties of spreading falsehood about the new farm laws. He appealed to the agitating farmers not to fall prey to these "white lies" and said the Centre was ready to address all their concerns.