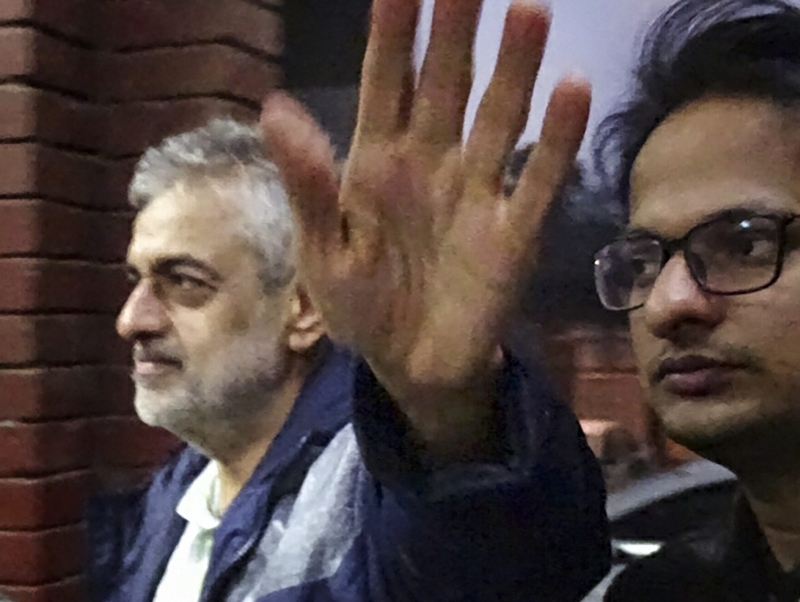 Lobbyist Deepak Talwar, arrested in a money laundering case, being taken to the court by the Enforcement Directorate officials. PTI Photo |

New Delhi: The Enforcement Directorate Thursday moved a Delhi court seeking orders to arrest lobbyist Deepak Talwar in a fresh case related to the purchase of 43 aircraft by erstwhile Indian Airlines from France’s Airbus Industrie in 2005. The agency moved the plea before special judge Santosh Snehi Mann. Talwar is currently in judicial custody in a separate case related to negotiations to favour foreign private airlines causing the loss to national carrier Air India.

In the present case, special public prosecutors D P Singh and Nitesh Rana told the court that Talwar’s custody was required to unearth the entire criminal conspiracy related to the money laundering in relation to the purchase. The court will hear the matter Friday.

“The cabinet committee on economic affairs/empowered group of ministers had approved the purchase of 43 Airbus Aircraft in 2006 and the purchase price per aircraft was fixed with the condition that Airbus will establish training and MRO Centre worth USD 175 million (around Rs 1000 crore). “However, purchase order was placed for supply of 43 aircraft by fraudulently deleting the said condition. Deletion of those conditions for establishing MRO and training centre has resulted in undue benefit of Rs 1000 crore to Airbus which should have been reduced from agreed purchase price of aircraft fixed by the government of India,” the ED said.

It told the court that the conduct of Talwar was non-cooperative towards the investigation and he would not appear before investigating authority in the present probe unless he is compelled by law to do so. In the first case, the ED alleged that Talwar acted as a middleman in negotiations to favour foreign private airlines causing the loss to national carrier Air India.

It told the court that it was trying to find out the names of officials of the Ministry of Civil Aviation, National Aviation Company of India Ltd and Air India, who favoured foreign airlines, including Qatar Airways, Emirates and Air Arabia, by making national carrier, gave up profit making routes and profit making timings.

“It has been alleged that officials of Ministry of Civil Aviation, NACIL, Air India, by abusing their official positions as public servants and receiving illegal gratification, in conspiracy with other public servants, private domestic and foreign airlines, made the national carrier gave up profit making routes and profit making timings of Air India in favour of national and international domestic and foreign private airlines.

“This resulted in a huge loss of market share to the national carrier and also led to pecuniary benefits to private domestic and foreign airlines,” the ED had told the court. Talwar was picked up by Dubai authorities in January in connection with the Rs 3,600 crore AgustaWestland VVIP choppers money laundering case and deported to India.