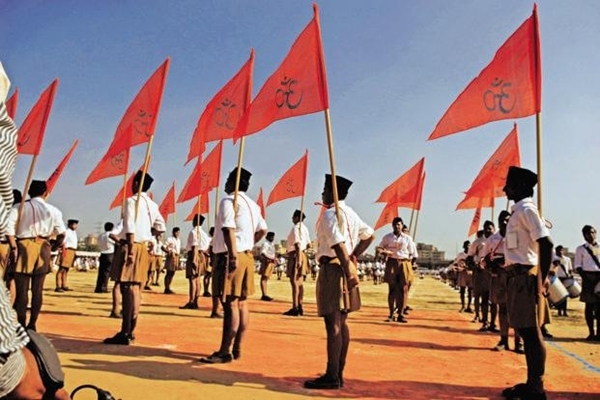 New Delhi: The Rashtriya Swayamsevak Sangh (RSS) in its key meeting held here in the national capital has taken two key decisions that not only gave a breather to the Bharatiya Janata Party (BJP) but also brought a smile to its face.

Apart from taking a unanimous decision not to take out celebratory processions across India, if the Ayodhya title suit verdict goes in favour of the Hindus, it has also backed a nationwide National Register of Citizens (NRC).

"No celebratory marches" This decision was taken in the RSS coordination committee meeting that was attended by Sangh chief Mohan Bhagwat.

The Vishwa Hindu Parishad core group was also part of the meeting, as were the heads of RSS affiliates. In the two-day meeting it was decided that neither RSS, nor RSS affiliates including the Vishwa Hindu Parishad will take out celebratory marches, if the Supreme Court gives a favourable verdict for them ahead of Chief Jutice Ranjan Gogoi stepping down on November 17.

This decision comes days after the RSS in a statement appealed to everyone to "respect the verdict, whichever way it comes" and to "maintain peace and harmony" across India.

Prime Minister Narendra Modi too, earlier in his Radio talkshow 'Maan Ki Baat' praised the "maturity" shown by political parties after the Allahabad High Court verdict of the Ayodhya title dispute came, that later was challenged in the apex court and now it has reserved its verdict after a marathon hearing ended in October.

Earlier this key meeting was suppose to take place in Haridwar, but the Sangh cancelled the venue and any other major events ahead of the final verdict.

The meeting that was attended by the RSS and BJP top leadership backed a nationwide imitation of National Register of Citizens (NRC), adapting the Assam model to root out "ghuspethiyan" (illegal immigrants).

A source, who attended the meeting said, the endorsement was unanimous and even some attendees chanted "Bharat Mata Ki Jai".