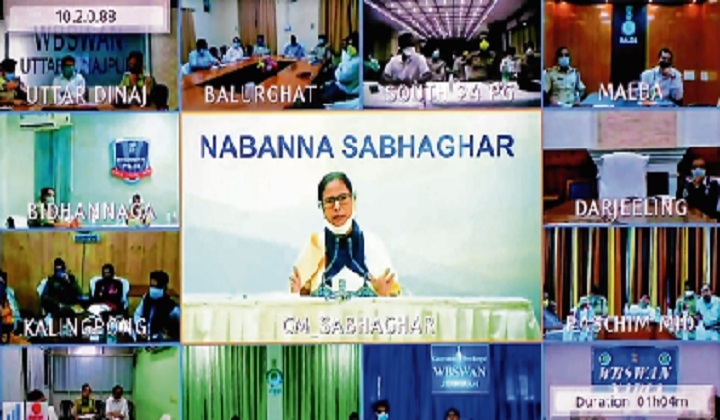 Kolkata: West Bengal CM Mamata Banerjee sought PM Modi's intervention on Wednesday in the alleged "whimsical" functioning of the railways in sending Shramik Special trains to West Bengal daily and urged the BJP-led central government not to pursue politics when the state is battling the dual crisis of the COVID-19 pandemic and the trail of destruction left behind by Cyclone Amphan.

The state's infrastructure is "stretched to its limit" following the devastation caused by Cyclone Amphan, she said, adding West Bengal can receive very few trains carrying migrant workers on a daily basis as of now.

The state considers the ferrying of a large number of migrant workers by the railways as a big problem for public health. The pressure should be "optimal and well managed", Banerjee said.

"The state government is facing a dual crisis of the COVID-19 pandemic and the devastation caused by Cyclone Amphan. Our infrastructure is completely stretched. The railways is sending Shramik Special trains to the state every day according to its whims and fancies, without even bothering to inform us," she said.

"Where will we keep these migrant labourers for institutional quarantine? This is not the time for politics. We are facing a very tough situation and we need time and space to tackle it," the chief minister said, ahead of the slated arrival of 11 Shramik Special trains to the state in the evening.

"They (BJP) can disturb me politically, but why are they causing harm to the state? West Bengal is facing such a major disaster. It will lead to a spike in COVID-19 cases. Who will take the responsibility then? "I request the prime minister and home minister to look into the matter. The prime minister should intervene," the feisty Trinamool Congress (TMC) supremo said.

The TMC government has asked the railway ministry not to send Shramik Special trains to the state till May 26 in view of the devastation caused by Cyclone Amphan.

Those returning from the coronavirus hotspot states of Maharashtra, Delhi, Gujarat, Madhya Pradesh and Tamil Nadu will have to go for a 14-day institutional quarantine, Banerjee said.

West Bengal is still reeling under the aftermath of Cyclone Amphan, restoring electricity and water supply are still major challenges for the state administration in many parts of the state. The anger mounting among the people has fuelled the blame games.

CM Mamata Banerjee lashed out at Calcutta Electric Supply Corporation (CESE) officials for their way of handling the power crisis, post the cyclone. The situation between the state and the private power firm turned sour for the past 7 days, but thje matter worsened, when a Fire officer electrocuted on Wednesday.

Mamata expressed her sorrow at the death of the fireman in Howrah, who was working to remove trees. The Chief Minister said she was saddened by the death of Sukanta Singha Roy, due to electrocution from power lines. “In spite of CESC personnel being present to ensure complete safety of work on power lines, such an accident is unacceptable and deeply disturbing. The state government is ensuring that swift and decisive action will be taken against perpetrators of such gross negligence,” read Mamata’s tweet.

Opposition parties have been slamming the Mamata Banerjee government for the badly managing the post-cyclone situation as people have been rendered homeless and some have been waiting for power supply to be restored. Amid the COVID-19 pandemic and adhering to the social distancing norms, no electricity and water supply, staying indoors has become a challenge, especially the elderly people.

The opposition has blamed the private entity CESC, an RP-Sanjiv Goenka Group company, for the failure to restore power supply in many areas for hours after the Amphan hit the state.

On Saturday, Banerjee visited Victoria House, the CESC headquarters in Esplanade in the city’s central area, where she questioned the corporation on restoration of power supply. Multiple areas saw massive protests by citizens over power abruptions after the cyclone made landfall last Wednesday.