The airline has been fined for letting an improperly trained pilot land a flight at Madhya Pradesh's Indore airport with passengers on board.

The pilot, who was the first officer on the flight, landed the aircraft at the Indore airport recently without first getting the requisite training in a simulator, they said. "This was a serious violation endangering lives of the passengers on board," an official said.

Vistara, is an Indian full-service airline, based in Gurgaon, with its hub at Indira Gandhi International Airport.

The carrier, a joint venture between Tata Sons and Singapore Airlines, commenced operations on 9 January 2015 with its inaugural flight between Delhi and Mumbai.

The airline had carried more than two million passengers by June 2016 and as of May 2019, has a 4.7% share of the domestic carrier market, making it the 6th largest domestic airline.

It operates a fleet of 51 aircraft at present, and has another 26 orders in the pipeline. Aircraft it operates are the Airbus A320 series, as well as Boeing's 737 and 787 series. 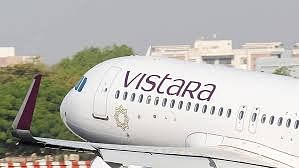