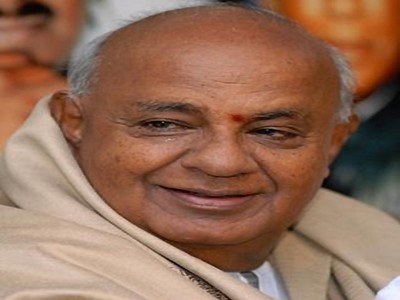 Bengaluru: Former prime minister and JD(S) patriarch HD Deve Gowda, who had on multiple occasions declared he would not contest any election, on Monday changed his mind and decided to contest the June 19 Rajya Sabha polls from Karnataka. He will be filing his nominations on Tuesday, his son and former CM HD Kumaraswamy said.

He said his father took the decision to once more contest following a request made by Congress President Sonia Gandhi, several national leaders and party legislators.

HDK tweeted: “Thanks to Sri Deve Gowda for agreeing to everyone’s consensus. From the people, former prime minister Deve Gowda has seen successes and defeats. By the people, he has acquired higher positions. It was not an easy task to persuade DeveGowda to enter the RS fray,” he said.

The JD(S), which has 34 seats in the assembly, is not in a position to win a seat in Rajya Sabha on its own. But in a tactical move, the Congress decided to give its surplus votes to the former PM. The BJP, which too has surplus votes, decided not to put up a third candidate, making his victory easy.

If he wins, this will be the second Rajya Sabha entry for 87-year-old Gowda, the first time being in 1996 as PM.

In the 2019 Lok Sabha poll, Gowda was defeated in Tumakuru constituency by BJP’s GS Basavaraj by over 13,000 votes.

Meanwhile, the BJP sprang a surprise by confirming the names of Eranna Kadadi and Ashok Gasti as the party’s nominees for the two Rajya Sabha seats. The announcement shocked senior leaders as several prominent front-runners were sidelined to pave way for second-rung leaders within the party.

Eranna Kadadi, 55, who began his political career in 1989, has strong roots in the RSS and worked his way up the BJP ladder.

Ashok Gasti, 55, hails from Raichur and also came through the ranks in the BJP after a stint with the ABVP.

The Congress has fielded veteran leader and a former leader of the opposition in the 16th Lok Sabha Mallikarjun Kharge, who on Monday filed his nomination as the party’s candidate for the June 19 Rajya Sabha polls from Karnataka.