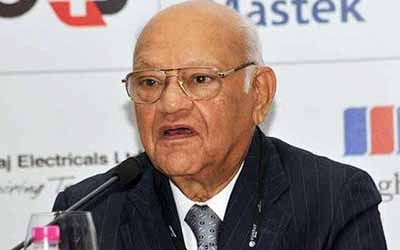 Replying to the correspondence received by the Delhi Commissioner of Police SN Shrivastava, the former Mumbai Police Commissioner Julio Ribeiro has said his doubts penned down in an earlier open letter were still unanswered about the license given to stalwarts of BJP to rant, rave and threaten the peaceful protestors.

Three days after Ribeiro emailed Shrivastava questioning the action initiated in the Delhi riots probe wherein 753 FIRs were registered against “peaceful protesters, the latter replied to the retired IPS officer stating the probe was being carried out without any discrimination based on caste or religion, and was backed by documentary and scientific evidence.

In a 2-page reply to Ribeiro, Shrivastava stated, “Delhi Police has examined a large majority of persons who either have a role in Delhi riots or have information that will help arrive at truth. It has questioned persons without regard to religion and party affiliation. It has collected documentary evidence including scientific evidence to support its case. The specific details, understandably cannot be shared at this stage. It has arrested 1,571 persons irrespective of caste or religion."

The retired IPS officer added he appreciated Shrivastava’s efforts of calling up to justify and explaining his stand, only to reply through a letter. However, Ribeiro pointed out that his doubts were unaddressed about the BJP stalwarts threatening the protestors.

Moreover, he also questioned the Delhi Police’s move to prolong filing the chargesheets in the 753 cases and make the arrests a day or two prior to the limit expiry.

“I note in your email to me that you doubted the patriotism of three who I named as ‘true patriots’ — Harsh Mander, Prof Apporvanand and me — I have not described one else as such and hence my surmise,” read an excerpt from Rebeiro’s reply to Shrivastava.