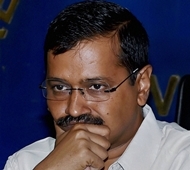 New Delhi: Chief Minister Arvind Kejriwal, who met the 13-year-old rape survivor and her kin at the AIIMS here today, called for democratic control to improve the law and order situation and said a path needs to be carved out at the present moment since Delhi is not a full state.

Expressing grief over the rape of the teenager, Kejriwal said the 13-year-old was having wounds in all parts of her body.

“I have met the family members. We need to do something, Delhi is not a full state and that is why repeatedly such problems are coming up. Every incident of crime reminds us that there should be democratic control over the law and order so that the people and law enforcement agencies can work together,” he added.

Kejriwal further said that he has sought time from Union Home Minister Rajnath Singh to discuss the law and situation in the national capital.

“The full statehood matter will take time, but in the present scenario a path needs to be carved out so that these kinds of incidents can be stopped. If democratic control on the agencies is more at the local level and the work is done by taking the people along then I think a result can come,” he added.

The minor girl, who is an orphan and mentally challenged, is presently being treated at the AIIMS where her condition is stated to be stable.

The victim lives with her maternal aunt at a village near Pul Prahladpur. She went missing on May 17 and a search operation was conducted but she could not be found.

Early on May 18, the locals spotted the girl lying unconscious near the railway track and raised an alarm.
One person has been arrested in connection with the case.