Security personnel stand guard at the spot after the attack. | Sajad Hameed
Follow us on

Srinagar: One CRPF officer was killed and three jawans sustained injuries in a militant attack in Lawaypora on the outskirts of Srinagar on Thursday, police said.

The militants opened fire on the CRPF personnel in Lawaypora in the Parimpora police station area in Jammu and Kashmir, a police official said.

Four Central Reserve Police Force (CRPF) personnel were injured in the attack and they were rushed to a nearby private hospital, where the officer was declared dead on arrival, the official said.

He said the injured jawans were moved to a military hospital here.

The deceased officer has been identified as sub-inspector Manga Ram Dev Barman.

The area, which has witnessed several attacks on security forces and encounters with militants in recent years, has been cordoned off, the official said. 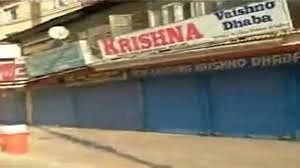