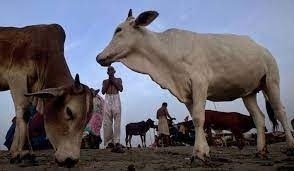 As many as 10 people were arrested allegedly for knocking down a self-styled cow vigilante by a tempo truck illegally carrying cattle in South Gujarat’s Valsad district. In a press release, the Valsad Police on Saturday evening stated the arrested persons were part of an interstate network under which cattle from villages in Valsad were purchased and transported illegally to Bhiwandi, Ahmednagar and Nashik in Maharashtra.

The incident took place on the Dharampur-Valsad road early on Friday morning when 29-year-old Hardik Kansara, a self-styled cow vigilante and local VHP volunteer, tried to stop the cattle-laden vehicle.

Acting on a tip-off a tempo truck carrying cattle began from Barsol village in Valsad’s Dharampur taluka towards Bhiwandi, Kansara, his two associates and a police team followed the vehicle. They tried to stop the vehicle by blocking the road but the tempo ran over Kansara, who died on the spot, police said. The tempo driver fled leaving behind his vehicle, carrying 11 animals.

An FIR was lodged at Dungri police station and 10 people, including the tempo owner, driver, and others involved in the illegal transportation of cattle, were arrested from different places.

They were booked under Section 304 (culpable homicide not amounting to murder) of the IPC, and provisions of the Gujarat Essential Commodities and Cattle (Control) Act and the Motor Vehicles Act, the police said. Of the 10 accused, 5 people were arrested in the past also for illegal transportation of cattle in Gujarat and Maharashtra, it said. The accused are Asgar Ansari, Javed Sheikh, Jamil Sheikh, Khalil Sheikh (all from Bhiwandi, Maharashtra), and Ansar Sheikh, Hasan Ali, Ali Murad Jamal, Dharmesh Ahir, Kamlesh Ahir, and Jayesh Ahir (from Valsad), it added.

Agartala: Three people were allegedly lynched in the Khowai district of Tripura on suspicion of cattle theft in the early hours of Sunday, police said. Villagers of Namanjoypara spotted a mini-truck heading towards Agartala, carrying 5 cattle, around 4.30 am, SP Kiran Kumar said.

They chased it and managed to stop the vehicle near North Maharanipur village. The villagers started thrashing the 3 persons on the mini-truck with “lethal weapons”, and lynched two of them, while the other managed to flee, he said.

The mob got hold of the other person at Mungiakami, a tribal hamlet near North Maharanipur, and he was lynched there, the officer added. Police reached the two locations immediately and took them first to a nearby hospital and then to the Agartala Government Medical College where the attending doctors declared they were brought dead, Kumar said.

Jaipur: A local Vishva Hindu Parishad leader was arrested for his alleged role in the lyn­ch­ing of Rakbar alias Akbar Khan for cattle smuggling in Rajast­han’s Alwar in 2018, police said on Sunday. This is the fifth arrest by the Ramgarh Police in the case. Police had filed a charge sheet against Paramjeet Singh, Naresh Sharma, Vijay Kumar and Dharmendra Yadav in 2019. Final arguments are yet to be heard by the court. Alwar SP Tejaswini Gautam said VHP leader Naval Kishore Sharma was arrested 3-4 days ago by the Ramgarh Police and the case was being probed by an ASP-rank officer.

Rakbar and his friend Aslam were beaten up severely by a group of people on suspicion of cow smuggling in Ramgarh on July 20, 2018.

Rakbar’s family had accused Naval Kishore Sharma, the chief of Gau Raksha cell in Ramgarh, of leading a mob to beat him to death.

ASP (Rural) Shriman Meena, the investigating officer in the case, said the VHP leader was arrested on Thursday under IPC sections 302 (murder), 304 (culpable homicide) and others.

Naval Kishore Sharma has been taken under 10-day police remand, he said.

Special Public Prosecutor Ashok Kumar Sharma said Naval Kishore Sharma's telephonic conversations were being examined for a long time after which his arrest was made.

He said the VHP leader gave an impression that he was helping the police in the case, but he was a part of the criminal conspiracy.

Rakbar and Aslam had allegedly purchased cows from Ladpura village and were taking them to their village in Haryana through a forested area near Lalawandi village when they were attacked by the accused.

Aslam had managed to escape, but Rakbar succumbed to injuries in a hospital. PTI AG SNE