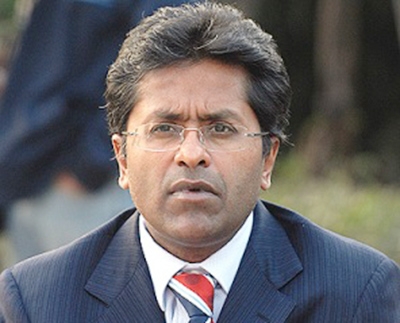 Says attempts are being made to seek his extradition, not deportation

New Delhi : With an eye on the forthcoming winter session of the parliament, the Congress has revived the Lalitgate controversy that had seen the almost complete washout of the monsoon session.

Party spokesperson Randeep Surjewala on Friday released parts of the correspondence between the then union finance minister P Chidambaram and his British counterpart George Osborne documenting the efforts of the union government to get back the disgraced ex-IPL chief Lalit Modi.“Both the union external affairs minister Sushma Swaraj and the union finance minister Arun Jaitley have deliberately misled both houses of parliament on this issue.

It also becomes evident that by referring to the extradition proceedings, instead of calling for Lalit Modi’s deportation, the two ministers want to ensure that the matter is delayed for decades, so that by the time it ends, people have forgotten about Lailt Modi,”said Surjewala at a media briefing.

He said that in response to a letter from George Osborne dated July 17th, 2013, the union finance minister Chidambaram had written on August 21st, 2013 that following the identification by UK authorities the government of India had issued 2784- emergency certificates- for the deportation of Indians who passports had expired or had been revoked as in Lalit Modi’s case and there was no reason for that the same procedure should be followed in this case as well. Ádditionally, Lalit Modi was required by the Indian authorities for investigation and it is not necessary in the case of 2784 others that they were wanted by law,” the Congress spokesperson added.

Both Jaitley and Swaraj had made a point in the parliament that the previous government was not serious about prosecuting Lalit Modi and had not made any efforts to bring him back. Apart from being wanted by the Enforcement Directorate, Lalit Modi is also accused of money laundering by investing in companies that have the Rajasthan chief minister Vasundhararaje Scindia and her son Dushyant as stakeholders through off shore account at hefty premiums.

The Congress had paralysed the parliament with a demand that both Swaraj and Scindia should be sacked, but the BJP stood by these leaders resolutely.

New Delhi:  The Interpol has yet again sought additional information from the Enforcement Directorate (ED) on its money laundering case against former IPL Chairman Lalit Modi as part of the process to issue a Red Corner Notice against him. Officials said the Interpol sought fresh information from the agency for the third time after the agency had moved the world police body through CBI in August this year for getting a global warrant notified against Modi in the Indian Premier League T-20 cricket tournament probe.

They said the Interpol wanted to have “more information” about the case registered by the agency under the Prevention of Money Laundering Act (PMLA) against Modi which has been replied back, for the third time, “very recently”.