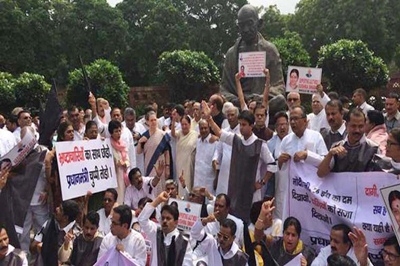 New Delhi: Congress today continued its protest for the third day in Rajya Sabha against the government’s “dictatorial” attitude in suspending 25 of its members in Lok Sabha, forcing two adjournments during the pre-lunch session.

The ruckus led to an adjournment within a few minutes after the House assembled for the day, till noon. The House got adjourned again soon after it reassembled. No sooner did Home Minister Rajnath Singh make a suo motu statement on the Udhampur terrorist attack during the Zero Hour, slogan-shouting Congress members trooped into the Well. They shouted slogans against the “dictatorial attitude” of the government and those asking Prime Minister Narendra Modi to break his silence over Lalitgate and Vyapam scam.

“I want to speak but House should be in order,” Balagopal said, adding that the ministers involved should resign and these issues should be properly investigated. Government was “infringing” on his personal rights as it was not complying with parliamentary procedures, he alleged. Kurien initially said he would not adjourn the House. “I am not going to adjourn. Why should I adjourn? I am going to sit here,” he said, adding “we can discuss any subject you want… ok, you shout I am not going to adjourn.”

But as the Congress members remained unrelenting, he adjourned the House till 1200 hours. When the House reassembled at noon, Chairman Hamid Ansari’s pleas for allowing the Question Hour to be taken up fell on deaf ears, with Congress members again trooping into the Well raising slogans. They raised the Lalitgate issue, Vyapam scam as well as the issue of black money, questioning the government “Where have ‘achhe din’ (good days) gone” and “where is black money”. Members of CPI-M, JD-U also stood at their seats. As the din continued, the Chairman adjourned the House till 2 PM.