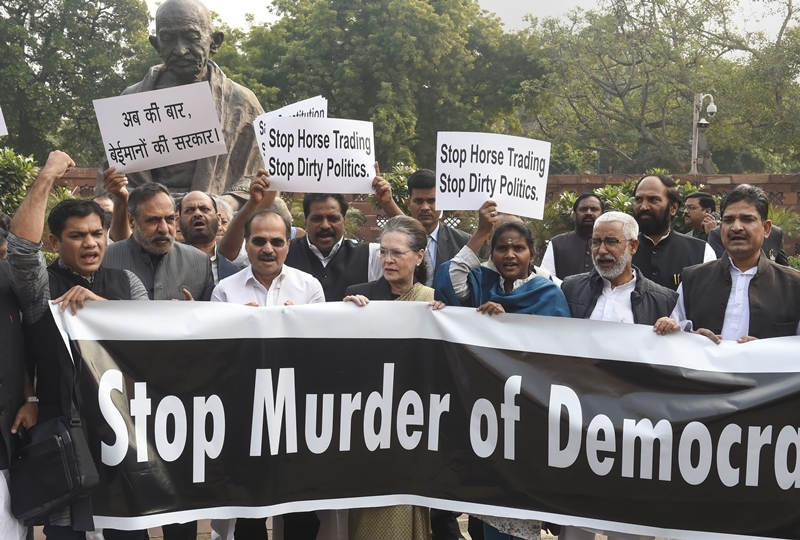 New Delhi: Sonia Gandhi, the Congress interim president, stunned everyone on Monday when instead of entering the Parliament House building, she just walked towards her party MPs protesting at Gandhi statue opposite the entrance and joined them on the Maharashtra issue.

Sonia raised slogans, ‘Save Democracy’, ‘Modi government Wake-up’ with other Congress senior leaders Anand Sharma, Ahmed Patel, Adheer Ranjan Chaudhary, Ambika Soni and Manish Tewari, while holding a banner with script on it ‘murder of the democracy’ on black background. 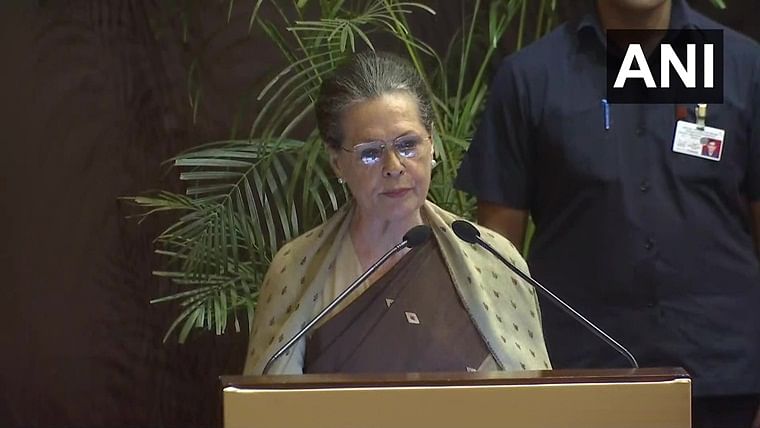 “We hope for the justice, and that’s why we knocked the doors of Supreme Court,” said Ahmed Patel. ‘It’s clearly the murder of the democracy, and totally unacceptable, that’s why we staged this protest today,” explained Congress MP Shashi Tharoor.

Pandemonium continued in the House even in the post-lunch session, prompting adjournment of the two Houses to meet again at 2 pm, after the ceremonial celebration of completion of 70 years of enactment of the Constitution.

The Shiv Sena MPs were missing from the protest as most of them are reportedly holed up in Mumbai where the drama is going on to oust the BJP government hoisted by the Governor in an early Saturday ceremony.

Rajya Sabha Chairman M Venkaiah Naidu adjourned the House straightaway up to 2 pm on the Congress members insisting to speak on the Maharashtra developments despite his rejection of their adjournment notices on the subject.

Naidu took two grounds for refusing to entertain the Congress demand: Subject is sub-judice and the motion on revocation of the President’s rule has still not come to the House to allow a discussion.

Deputy Chairman Harivansh cited his ruling in the post-lunch session and adjourned the House to Tuesday at 2 pm as the the pandemonium continued.

The Lok Sabha met briefly in the post-lunch session with chairperson Meenakshi Lekhi carrying out the business of statements listed on the agenda and then adjourned the House for the day when the Congress members resorted to the ruckus.