Congress does not practise politics of minorityism: P Chidambaram 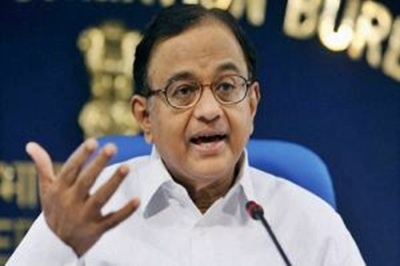 New Delhi: Senior Congress leader P Chidambaram today rejected criticism that his party practised politics of minorityism but asserted it cannot close its eyes to the discrimination against Muslims and other sections including Dalits. He scoffed at the suggestion that Rahul Gandhi’s recent visit to Kedarnath temple was an attempt at wooing Hindu votes to counter the perception about being pro-minorities., “It’s a personal decision of a person. So why should there be any comment on that decision. I reject your question. There is no such thing as minorityism,” Chidambaram told PTI in an interview.

“You are mixing the two issues. Before visiting the Kedarnath temple he said why he visited there. Kedarnath temple was being opened. The Chief Minister invited him to come on the day and I (Rahul) also felt an urge to visit the temple,” he added. The former Home Minister asserted that everybody in this country must be equal. “We have just seen a report a few days ago a young man does not get a job because he is a Muslim. There is also a report that a young girl does not get a housing because she is a Muslim.”If you want to close your eyes to these realities, you can do so but why should the Congress party close its eyes to the stark reality that there is discrimination against Muslims and some other sections also. There is discrimination against Dalits also,” he said. Chidambaram was responding to a question about a perception that politics of minorityism by Congress damaged it in the elections.

Speaking on a wide range of issues on party affairs including the possibility of Rahul Gandhi’s elevation and Congress being out of power in a large number of states, the senior party leader expressed confidence that Congress will bounce back to power once again as it did on many occasions in past and will get allies when elections come. When told that Congress seems to be in a tight spot after defeat in Lok Sabha polls and successive defeats in some states, Chidambaram expressed confidence that the party will come out its blues.

“You said the same thing in 1977. In 1977 also you said that when Congress was wiped out in entire north India, but Congress came back in 1980. Do not forget history. Congress today was defeated in an election and we accept that. We accept it. “But, why do you say that Congress can never come back to power? Where was BJP in 1984? It had two MPs and no state government under its control in 1984. It has come to power,” he said. Asked as to who are the national allies of Congress in the new environment, Chidambaram said that one cannot count national allies everyday. “When elections come alliances will be formed, do not assume that Congress party is completely friendless. Friends will come, friends will go. That is the way of politics. But, Congress will find friends and allies when elections are around,” he said.

When pointed out that Congress could not come back to power in states like Tamil Nadu, Madhya Pradesh, Chhattisgarh, Uttar Pradesh and Bihar after losing power there once, the Congress leader said that it is because that is the way of politics. “Parties lose and parties win. You wrote us off in Rajasthan, we won. You wrote off us in Maharashtra, we won. Parties will lose and parties will win elections. Why do you assume that the party can never win?” he said. Chidambaram also rejected suggestions that the issue of “dual leadership” in Congress damaged it saying there was no thing like dual leadership in the party. There is no dual leadership in the party. What do you mean by dual leadership? The party had a leader, the Government had a leader,” he said.

“I am not saying that. If we get a simple majority on our own, whether we will have a single party government or a coalition government is a decision that should be taken then. But please remember, NDA is a coalition today,” he said. To questions about Rahul Gandhi’s style of functioning, he said that the Congress Vice President has his particular style of doing things and there is no need for any one to approve or disapprove it. “It is not for me to approve or not approve. He does what he thinks is right. He has a particular style of doing things. Why should I approve or disapprove it. I do not have to agree or disagree. Gandhi does what he thinks is right. He has got a particular style of functioning. There is no need for anyone to approve or disapprove it,” he said.

Asked whether he thinks that Rahul should become party President now, Chidambaram said that this is not a decision that he can take but stressed “I want younger leaders to take over at every level.” Replying to questions about Rahul Gandhi’s transformation, he said,  transformation is your creation. He does what he thinks is right. Your perception that he has transformed. He does what he thinks is right. I do what I think is right.” Replying to a question about generation conflict in Congress, the senior leader said,”No. Where is he generational conflict? Younger leaders will constantly knock on the door for responsibilities, for more responsibilities. Perfectly right. I have constantly said that younger people must take over at every level PCC, DCC.”

Chidambaram, who had two years ago announced that he will not contest an election again, said that “older people must make way for younger people” but made it clear decisions like the older people not taking up any active posts, should be voluntary ones. “These are personal decisions that each one make…there is no such thing as retirement in politics. you are in politics as long as you wish to be. you are in Parliament as long people wish you to be in Parliament,” he said adding that despite not being in Parliament he is very active. “I am very actively involved. I am not in Parliament but I am very actively involved. Being in Parliament is not the only way to be in politics. I have contested elections for 30 years. I announced it over two years ago that I won’t contest an election again. “If you contest again, people will say is there no body else in your party. Why are you clinging to the seat like a limpet. If you do not contest, why do not you contest. How do you win the argument?” he said. Asked whether seniors should stop taking active posts, Chidambaram said,”that must be voluntary. That has been the practice in Congress party. Older people must make way for younger people.”