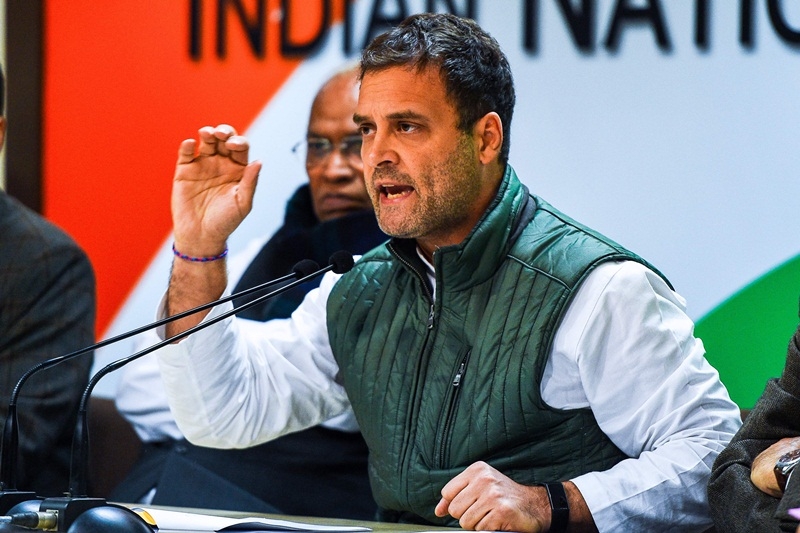 Jaipur: Congress president Rahul Gandhi promised the farmers that the party would waive farm loans in every state if people vote the Congree to power in the upcoming Lok Sabha election. At a farmer’s rally in Jaipur on Wednesday, he said his party was committed to addressing the farm distress and would introduce green revolution to resolve their problems. It was Gandhi’s first farmer’s rally after the party came to power in Rajasthan, Madhya Pradesh and Chhattisgarh. The Gandhi scion said people have voted the Congress to power to show their strength to PM Modi and the anti-farmer BJP government at the Centre. The party will continue winning streak in the LS poll.

The national party president in his fiery address said the farmers are the most-distressed class. Their needs would have to be understood sympathetically. The Congress had announced to waive off the agri loans within 10 days of coming to power, it has kept its promise. Launching the campaign from Rajasthan, Gandhi said the Modi government had been playing on backfoot, but the farmers and the youth should play on the front foot and hit sixes. Modi and his government bats under fear, but the farmers should bat fearlessly and go on hitting sixes. “The Congress understand the pains and the agonies of the farmers. We understand problems, and are committed to providing solutions to improve their lives. We will keep our eyes and ears open and hear their grievances. It’s our feelings we promised the loan waivers,” he said, adding, “We have started to wipe their tears. We will do it across the country. We have sounded the bugle against PM Modi humbly asking him to waive the farm loans. He will have to announce the relief in every state. We won’t let him sleep until it’s done.” “We will do everything to ensure the farm output is increased.

For this, the farmers will have to use modern technology,” said Gandhi. The BJP-led government had waived off the loans worth Rs3.50 lakh to 15 business houses. Why it was not doing it for the poor farmers, he asked. In his aggressive tone, Gandhi blamed PM for the Rafael deal, saying when defence minister Nirmala Seetharaman spoke for two-and-a-half hours, the PM, who boasts of a 56-inch chest, did not come to Parliament. He went to Punjab and avoided the session as the chowkidar (guard) was himself a chor (thief) and was pleading a woman minister to bail him out. “The French President told me he was asked by PM Modi to give the Rafael contract to Anil Ambani’s company. The Hindustan Aeronautics claims were ignored by the Modi government, as it was bent on helping the Ambani group. The defence minister could not field his question during the Lok Sabha debate. We want a JPC probe into the affairs of Rafael that would bring forth the truth.” He said there was a need for a change, the process that started in the three states would now spread to the entire nation. Rajasthan CM Ashok Gehlot said after announcing the farm loan waivers the government was working on the modalities. The farmers would soon get the benefits.