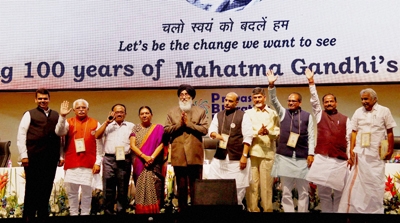 Gandhinagar : The curtains were rung down on the 13th Pravasi Bhartiya conclave on Friday with vice-president Hamid Ansari presenting the Pravasi Bhartiya Samman award to fifteen people including the President of Guyana Donald Rabindernauth Ramotar at a valedictory function where he stressed on the need for participative involvement of the NRI community to fuel rapid improvement for the nation’s economic well-being.

Earlier in the morning, Union Home Minister Rajnath Singh said the Centre was working tirelessly to turn the country into an exporter hub of India manufactured products and sought NRI investment to help India become a superpower even as state chief ministers unfolded the red carpet enumerating steps taken to attract them to their respective domains

“Punjab has suffered the most, contributed utmost to the freedom struggle and is the granary of India. It needs your support  for us to do better”, said Prakash Singh Badal, Punjab CM even as CM Shivraj Singh Chauhan projected Madhya Pradesh’s impressive developmental profile pointing out that there were no windows, single or otherwise for we have opened the door wide  for NRI investment.

Oomen Chandy while showcasing Kerala also sought some time at such gatherings to discuss the problems of immigrants while Chandrababu Naidu, heading Andhra Pradesh reeled off the benefits of being a sunrise state even as Manoharlal Khattar of Haryana promised hassle-free land and all clearances with assured power to match of the NRIs chose to like his way.

Gujarat CM Anandiben Patel brandished Prime Minister Modi who had turned the state into a showcase destination as chief minister as her trump card while seeking more and more investments not only from the Gujarati diaspora but from people of Indian origin worldwide. Devendra Fadnavis of Maharashtra was not found wanting either and said that his state intended to spend Rs one lakh crores over the next two years on infrastructure alone besides setting up a new 600 sq km urban agglomeration outside Mumbai.