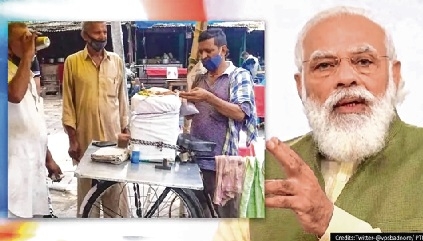 A Chandigarh hawker had created quite a buzz online for offering free ‘chhole bhature’ to anyone who got vaccinated against Covid-19. He also caught PM Modi’s attention. The PM especially mentioned Sanjay Rana, from Chandigarh’s Sector 29, for his thoughtful act...

-- However, the Opposition was not amused, as Senior Congress leader P Chidambaram on Sunday said the government should either call for a joint parliamentary committee probe into the Pegasus snooping allegations or request the Supreme Court to appoint a sitting judge to investigate the matter, and demanded that Prime Minister Narendra Modi make a statement in Parliament clarifying whether there had been surveillance or not.

-- The former home minister said he was not sure that one can go to the extent of saying that the entire electoral mandate of 2019 was vitiated by the "unlawful snooping" but added that it may have "helped" the BJP to score that victory which has been "tainted" by the allegations.

-- In an interview with PTI, Chidambaram said a probe by a joint parliamentary committee can be mo­re effective than an investigation by the Parliamentary Standing Committee on Information Technology, asserting the former would be more empowered by Parliament.

In a statement on Sunday, Brittas, who is a CPI-M member, said that despite the very serious nature, the central government has not cared to investigate into the allegations involved in the issue but "made only a hopeful hope that the time tested processes in our country are well-established to ensure that unauthorised surveillance does not occur".