Chennai Rains: Lady Inspector carries unconscious youth on shoulders to save him; WATCH 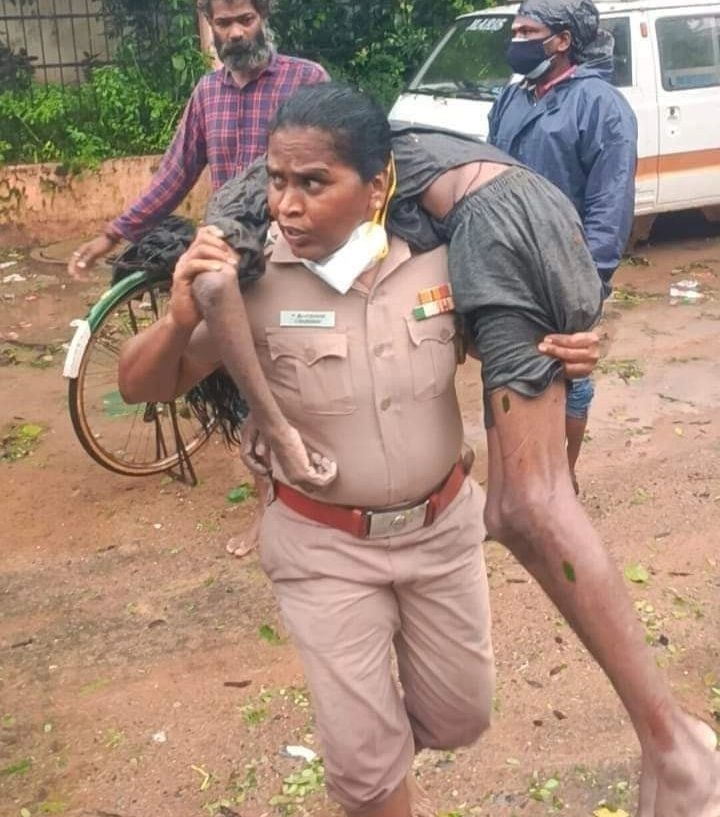 Chennai: As overnight rains pounded Chennai crippling normal life, a 53-year-old woman Inspector of Police Rajeshwari emerged as a hero carrying an unconscious youth on her shoulders and rushing him to a hospital in an auto rickshaw. Videos and images of Rajeshwari carrying Udhaya, aged around 27 years, on her shoulders even as able-bodied young men around her were running errands, went viral nationally on Thursday afternoon making her the face of humane side of the police force.

Rajeshwari, who is posted at the T P Chathram Police Station near Anna Nagar, a posh locality in Chennai, was on the road overseeing an operation to clean a fallen tree when she received information about a youth lying unconscious at a cemetry nearby. She immediately rushed there and bodily lifted the youth while the men around her scurried to fetch some clothes for him. Spotting an auto rickshaw, the barefooted Rajeshwari sprinted and laid him inside the vehicle screaming to those around to rush him to the hospital and "save a life".

Within hours Rajeshwari became the toast of Twitterati with everyone including senior IAS and IPS officers lauding her effort. Chenani City Commissioner of Police Shankar Jiwal personally met and commended her. "Rajeshwari has done an excellent work. She has been an excellent officer. All the kudos [for the police] go to her," he said.

Rajeshwari later met Udhaya at the Government Kilpauk Medical College Hospital and inquired about his well being. He was recovering and his mother was with him.

This is not the first time that Rajeshwari is in the limelight. She had previously hit local headlines when she rescued a destitute pregnant woman.

Despite the limelight, she sounded unaffected by the focus on her and said she merely rescued an unconscious man. Asked her age, she laughed and said, "My age? I am 53."