Chaos in Northeast, where is Modi govt: Cong 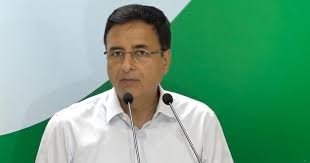 The Congress on Wednesday alleged that there was total chaos and complete breakdown of law and order and constitutional machinery in the Northeast under the watch of Prime Minister Narendra Modi and Home Minister Amit Shah.

Senior party leader Randeep Singh Surjewala asked where is the Modi government when there are war-like hostilities between states ruled by BJP-NDA and when miscreants are attacking the convoy of Meghalaya Governor and militants firing through the streets.

"Chaos prevails and complete breakdown of law and order and Constitutional machinery in North East under the watch of PM and HM," he said on Twitter.

"Miscreants attack the convoy of Meghalaya Governor. Militants were firing through streets. Home Minister of the state has resigned. China intruding into Arunachal. Where is the Modi Government," he asked.

Curfew was imposed in Shillong and mobile internet services withdrawn in at least four districts as vandalism and arson rocked the Meghalaya capital and nearby areas on Independence Day during the funeral procession of a former militant, who was killed in a recent police encounter.