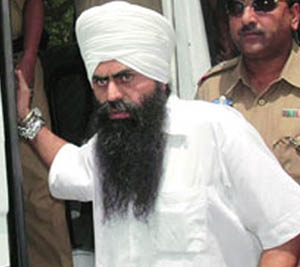 New Delhi : The Centre on Thursday upreme Court that it has “no problem” with commutation of death sentence of Khalistani terrorist Devinderpal Singh Bhullar to life term and the petition in this regard has to be allowed in view of the court’s verdict that delay in deciding mercy pleas can be a ground for such relief.

“This is a case which has to be allowed because the mercy petition of the convict was decided after a delay of eight years,” Attorney General G E Vahanvati told the bench headed by Chief Justice P Sathasivam which said that a short order will be pronounced on March 31.

The Attorney General also said that he was making the

submissions to this effect as the Centre’s petition challenging the January 21 judgement, in which it was held that inordinate delay by government in deciding mercy plea of death row convicts can be a ground for commuting their sentence, has been dismissed.

“So we have to follow the January 21 judgement and we have no problem,” Vahanvati said. He said there was no need to go into the merits of thecurative petition filed by Bhullar wife Navneet Kaur.

At the outset, the bench, also comprising justices R M Lodha, H L Dattu and S J Mukhopadhaya, wanted to know about the health condition of Bhullar and perused the February 8 medical report of the Institute of Human Behaviour and Allied Sciences (IHBAS).

The bench had on January 31 stayed Bhullar’s  execution and had agreed to review its judgement by which it had rejected the 1993 Delhi bomb blast convict’s plea to commute his death sentence to life term.

It had issued notice to the Centre and Delhi government on a curative petition and had also directed IHBAS, where Bhullar is being treated, to file a medical report on the condition of the death row convict who is alleged to be suffering from mental illness.

The plea of Bhullar’s wife for commutation of death sentence assumes significance in view of the apex court’s January 21 verdict holding that inordinate and inexplicable delay by government in deciding mercy plea of death row convicts can be a ground for commuting their sentence.

Bhullar’s wife has filed the petition against the apex court verdict which rejected her plea to commute his death sentence to life imprisonment on grounds of delay on the part of the government in deciding his mercy plea.

He was convicted and awarded death penalty for triggering a bomb blast in New Delhi in September 1993, which killed nine persons and injured 25 others, including then Youth Congress president M S Bitta.

The apex court had on March 26, 2002 dismissed Bhullar’s appeal against the death sentence awarded by a trial court in August 2001 and endorsed by the Delhi High Court in 2002.

He had filed a review petition which was also dismissed on December 17, 2002. Bhullar had then moved a curative petition which too had been rejected by the apex court on March 12, 2003.

Bhullar, meanwhile, had filed a mercy petition before the President on January 14, 2003.

The President, after a lapse of over eight years, dismissed his mercy plea on May 14, 2011. Citing the delay, he had again moved the apex court for commutation of the death sentence but his plea was rejected.

The apex court on January 21 had held inordinate delay by government in deciding mercy plea of death row convicts can be a ground for commuting their sentence and had granted life to 15 condemned prisoners including four aides of forest brigand Veerappan.