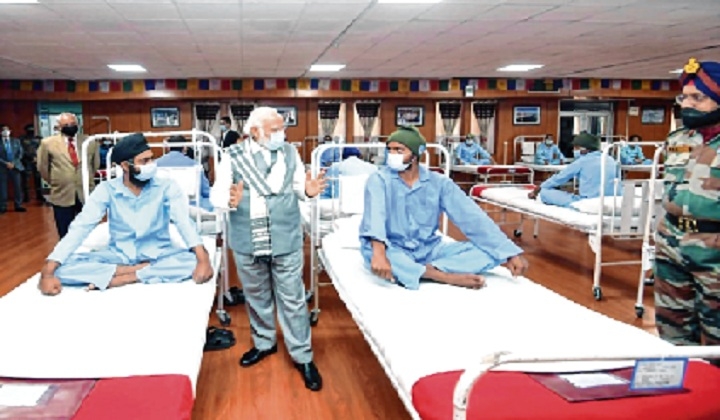 PM Modi on Friday told the soldiers injured in the violent face-off with Chinese troops in Ladakh's Galwan Valley last month that they gave a befitting reply and their valour and the blood they have shed will inspire people for a long time to come.

Interacting with them at an army hospital in Leh during his visit, Modi said the world is discussing that India's brave soldiers have shown valour before "such powers".

The world, he said, is eager to know about the young men, their sacrifice, their training and their excellent level of commitment. "The bravehearts who left us, have not gone without a reason. Together, you all also gave a befitting reply (karara jawab bhi diya hai)," he told the injured soldiers.

Modi said since the soldiers are confined to hospital due to injuries, perhaps they are not fully aware that 130 crore Indians feel proud of them. "Your valour and courage are encouraging the new generation. Your valour and the blood you have shed will inspire the youth and the citizens for a long time to come," he said in his address which lasted a little over four minutes.

Stressing that India should become self-reliant, he said the country has neither bowed before any power of the world nor will it ever do so. The prime minister said he came to Ladakh to meet the soldiers, to touch them and to carry back the energy and inspiration from the interaction.

Congress leader Rahul Gandhi indirectly targeted PM Modi on Friday over Chi­n­ese intrusions at the LAC, saying there is a mismatch between the claims of the PM and Ladakhis. Gandhi also shared the voices of some Ladakhis in a video alleging that the Chinese have occupied Indian territory in Ladakh. The jibe followed PM's visit to Nimu, a forward post in Leh.

New Delhi: In a strong support to India over its border standoff with China in eastern Ladakh, Japan on Friday said it opposed "any unilateral" attempts to change the status quo in the region.

India has been insisting on restoration of status quo ante across eastern Ladakh to restore peace and tranquillity in the region. India and China have held several rounds of diplomatic and military talks over the last few weeks to ease tension.