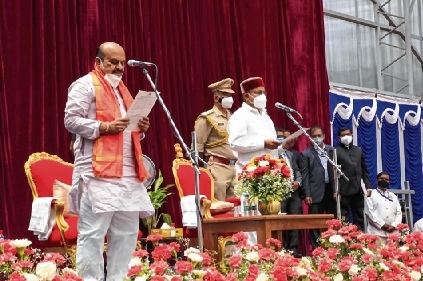 Armed with ample blessings from former chief minister BS Yediyurappa, his political guide, Basavaraj Somappa Bommai, 61, was sworn in as the 23rd Karnataka Chief Minister on Wednesday by Governor Thaawarchand Gehlot in a brief ceremony in Bengaluru on Wednesday. Conveying a subtle message he is still the boss, Yediyurappa, whom many consider as the de facto CM in the coming days, was present on the stage.

A rank outsider who featured way below the heavyweight list of leaders aspiring for the CM’s chair, Bommai was picked for the top post in Karnataka at a meeting of BJP MLAs on Tuesday. Such twists happened earlier too in his life. “I was a very reluctant politician. I am an engineer by profession and worked with Tata Motors. I wanted to be an entrepreneur. That’s why I came to Bengaluru but ended up being a politician,” Bommai told the media. The new CM offered prayers and sought blessings from Lord Hanuman at the Bhagavan Sri Maruthi Temple and BSY ahead of the swearing-in. He said he was grateful to PM Modi, Home Minister Amit Shah, Defence Minister Rajnath Singh and BJP national president JP Nadda for choosing him for the top seat.

The PM congratulated Bommai, saying he brings with him rich legislative and administrative experience. “I am confident he will build on the exceptional work done by our government in the state. Best wishes for a fruitful tenure,” he tweeted.

In a separate tweet, the PM praised BSY for his work for the party and the state. “No words will ever do justice to the monumental contribution of Shri @BSYBJP Ji towards our Party and for Karnataka’s growth. For decades, he toiled hard, travelled across all parts of Karnataka and struck a chord with people. He is admired for his commitment to social welfare,” Modi tweeted.

Bommai would be meeting the PM and other senior leaders in Delhi in the coming days.

A 3-time MLA from Shiggaon in central Karnataka’s Haveri district, Bommai comes from the powerful Lingayat sect like Yediyurappa and was among his close confidantes. The Veerashaiva-Lingayat community forms 16% of Karnataka’s 68 million population.

He was minister for home affairs, law, parliamentary affairs and legislature in Yediyurappa’s council of ministers which was dissolved on Monday.

Bommai chaired the first Cabinet meeting where he announced a series of pro-poor measures including scholarships for children of farmers. Later, addressing senior officers, he said officials will have to work with team spirit to deliver a reliable, responsible, transparent and efficient administration.

"I had kept my fingers crossed. I know I was one of the 6-7 leaders in the race. I have not been to Delhi. However, PM Modiji, Home Minister Amit Shahji, Defence Minister Rajnath Singhji and BJP president JP Naddaji have reposed faith in me. Despite fierce competition, they have chosen me. I have promised the citizens of Karnataka I will rise to the occasion and keep up whatever faith and trust they have in me," said Basavaraj Bommai, Karnataka CM.

He said the government will focus on maintaining fiscal discipline through efficient utilisation of resources and reducing expenditure amid pandemic. On his priorities, he said the immediate task is to bring life back to normalcy in flood-hit areas. He plans a series of meetings on how to prevent the third wave of Covid-19. He does not have an RSS background and joined the BJP in 2008 during his second stint as a Karnataka MLC (member of legislative council) as the Janata Dal-Secular nominee. He contested his first assembly election in 2008 as a BJP contestant and subsequently served 3 chief ministers — BS Yediyurappa, Sadananda Gowda and Jagadish Shettar — over the next five years.

His father, SR Bommai, is always remembered for the famous Supreme Court case. The senior Bommai was the Karnataka chief minister in late 1980s. Dismissal of his government led to the landmark SC judgment that made floor test a mandatory requirement for the sacking of a state government and thereby curbing the misuse of Article 356 of the Constitution by the central government. By choosing Basavaraj Bommai, the BJP has found a way to pacify the community sentiments and Yediyurappa, the 78-year-old architect of the BJP in the state.