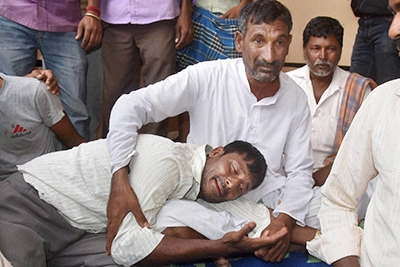 Betador: Relatives of Lance Naik Hanumanthappa Koppad mourn his death at his home in Betador in Hubli on Thursday. Koppad was miraculously found alive after remaining buried under huge mass of snow for six days at Siachen Glacier, died in New Delhi on Thursday. PTI Photo(PTI2_11_2016_000192B) |

Last rites to be performed with full state honours

Dharwad (KTK) : The village of Lance Naik Hanamanthappa Koppad plunged into grief as he passed away on Thursday after battling for life since his miraculous survival in Siachen, with Chief Minister Siddaramaiah leading the state in paying homage to the braveheart from Karnataka.

As the tragic news of Hanamanthappa’s demise broke, a large number of relatives, friends, villagers and media contingent gathered near his home at Betadur village in Kundagol taluk of Dharwad district in north Karnataka.

While Mahadevi, Hanamanthappa’s wife along with his daughter and close relatives are in Delhi, the other family members in the village were inconsolable. Siddaramaiah, who was addressing a rally in Bengaluru for the February 13 Hebbal Assembly segment by-polls, paid his homage to the brave soldier by observing two minutes of silence and said he had sacrificed his life for the country.

The CM said he has already spoken to officials at Karnataka Bhavan in Delhi and asked them to provide all assistance to Hanamanthappa’s family, including making arrangements for a special flight to bring them back to the state. Siddaramaiah said ex-gratia will be announced to families of all three soldiers’ from the state – Mahesh from Mysuru, Nagesh from Hassan and Hanamanthappa, who died in the Siachen ‘tragedy’.

“We are deeply pained because we thought he will recover in one or two days and come back. We prayed to all Gods… But I think God couldn’t hear us…. The family is shattered….” said Hanamanthappa’s friend Manjunath weeping inconsolably.

“Whole Betadur is immersed in grief…; All of us villagers prayed to Gods belonging to every religion for his recovery, don’t know why God couldn’t hear our prayer,” a villager said.