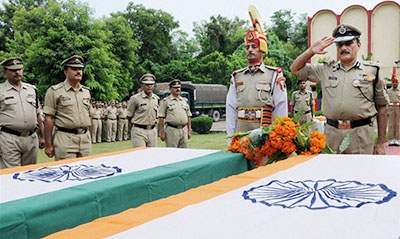 New Delhi : Only one of them had a weapon to protect his over 40 unarmed colleagues returning from long leave but two BSF troopers doggedly fought two heavily-armed terrorists, not only saving their convoy but nearly two dozen others passing that stretch in Jammu and Kashmir’s Udhampur district on Wednesday – but at the cost of their own lives.

BSF constables Rocky, the only armed man on the bus, managed to gun down one of the attackers before succumbing to his injuries, while Subhendu Roy, who was driving the bus, despite being hit several times, held on tenaciously to the door to prevent the terrorist from entering and attacking his defenceless colleagues.

Rocky hailed from Ramgarh village in Haryana’s Yamunanagar district, while Roy was from  West Bengal’s Jalpaiguri district.  Border Security Force (BSF) Director General D.K. Pathak gave full credit to the two whom he called ‘heroes and martyrs’ for their quick reaction and ‘tremendous courage’.  It was 7:30 am on Wednesday when two alleged Lashkar-e-Taiba (LeT) militants, later identified as Noman alias Nomin (code name) and Naveed Yakub alias Usman, ambushed the BSF convoy at Samroli, about 18 km ahead of Udhampur on Jammu-Srinagar National Highway IA.  Noman, said to be a resident of Bahawalpur in Pakistan, was killed by Rocky, while Yakub, who hails from Faisalabad in Pakistan, was later caught by the villagers and handed over to the security agencies.

“Rocky and Subhendu fought till their death with tremendous courage and saved the lives of 42 other BSF men travelling in the bus,” Pathak told IANS.