Bengaluru Road Rage Video! Woman drags man on car bonnet for 1 km, second incident in a week |
Follow us on

Bengaluru: A shocking video has emerged on Friday where a man is dragged by a woman on her car bonnet for around 1 km. The incident reportedly took place in Bengaluru's Jnana Bharathi Nagar area.

In the shocking video posted by Imran Khan on Twitter, one can see a Tata Nexon car speeding away while some bikers are seen following it. After some distance, a man is seen on the car's bonnet. The car driver is seen speeding the car despite having a man stuck on the bonnet.

According to police, Darshan was dragged by Priyanka on her Tata Nexon car for about 1 km after they had an argument over the collision. As soon as Darshan tried to stop Priyanka's car, she tried to flee away. Hence, Darshan got on the bonnet and was dragged ahead.

Deputy Commissioner of Police (traffic west) said Priyanka hit Darshan's car. "When he asked her to stop, the woman showed a vulgar sign and was trying to drive away. When Darshan intercepted her car, Priyanka refused to step out of the vehicle and kept driving. Darshan jumped over the car's bonnet to save himself and Priyanka drove the car for a kilometre with Darshan on top of the bonnet."

"After Priyanka stopped the car, Darshan and his friends broke the car's parts. Both the parties have filed cases against each other," said the DCP.

FIR filed against both parties

An FIR has been registered against Priyanka under Section 307 (attempt to murder) of the IPC, police have also booked Darshan and his friends under Section 354 of the IPC for outraging the modesty of a woman. 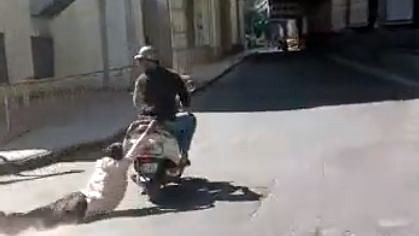