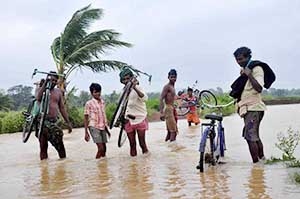 Villagers wade through flooded road after cyclone strike at Balugaon village of Ganjam on Sunday. PTI |

Anticipating the fury of Phailin, villagers were given shelter in the army establishment and provided food and other basic amenities

New Delhi : An Army Air Defence institution in Odisha’s Gopalpur saved the population of four adjoining villages which have been totally devastated after the cyclone Phailin struck landmass.

“The Army Air Defence (AAD) establishment in Gopalpur, which lay on the direct path of the cyclone Phailin, saved the four adjoining village population located in its vicinity from the onslaught of the cyclone that left a trail of flattened fields, uprooted trees and damaged power pylons among other things,” a Defence Ministry release said here.
Villagers were given shelter in the army establishment and provided food and other basic amenities before letting them proceed to their homes this morning, it said. Anticipating much of the fury of the impending cyclone, the Army had also mobilised one engineering column with medical and signal equipment and personnel to tackle any emergency. Meanwhile, Indian Naval Ships Ranvijay and Jalashwa continue in wait in Vishakhapatnam to respond to any alerts for relief even as a survey ship, INS Investigator is currently on its way from Port Blair to Paradip with aid material in case needed.
Six teams of Navy divers are also currently at Gopalpur, while ten other similar teams are at Srikakulam area in Andhra Pradesh as part of the Navy’s preparedness.
At Chilka, Odisha navy divers from the Naval Training establishment also helped villagers affected in the low lying areas that were flooded due to torrential overnight rains.
The Coast Guard also rendered medical assistance to 18 fishermen who were washed ashore after having jumped into the sea from their stranded boats off Paradip.ICGS Samudra Pehradar, one of the bigger ships that the Coast Guard operates is currently augmenting the efforts in the sea off Odisha coast. Meanwhile, Defence Crisis Management Group (DCMG) is coordinating rescue operations in cyclone-hit Andhra Pradesh and Odisha.
“The DCMG, an apex level body of the Defence Ministry to deal with crisis situations was activated on October 11.
“In Phase-I, it coordinated the moving forward of various resources and keeping them ready to deploy as per requirement of the state governments along with setting up of the Unified Task Force headquarters at Bhubaneswar consisting of an overall Task Force Commander and individual service component commanders,” a Defence Ministry release said here today.