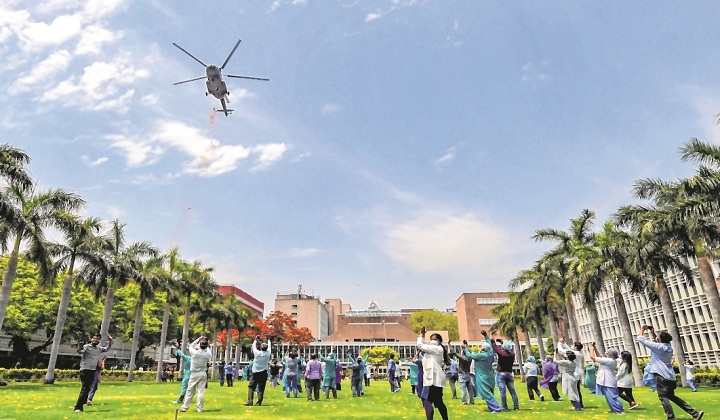 Doctors, nurses and other medical and paramedical workers react as an IAF chopper showers flower petals on them at the AIIMS to express gratitude towards them for their fight against the COVID-19, in New Delhi on Sunday. | _PTI

New Delhi: The Indian Air Force (IAF) on Sunday conducted flypast across India and its jets and transport planes and choppers showered petals on hospitals and places of national importance to express honour and gratitude towards the coronavirus warriors who are battling the pandemic. It was part of the nationwide thanksgiving effort by the armed forces to honour doctors, paramedics, sanitation staff, police and other frontline workers battling coronavirus in the country.

The IAF choppers and jets, including MiG-29, Sukhoi-30 and Jaguar, conducted flypasts and Army bands played patriotic tunes outside medical buildings in most districts across the country from east to west and north to south.

The armed forces showered petals at the Goa medical college, SNM hospital in Leh, Jaipur in Rajasthan, Rajpath and police memorial in Delhi, Sukhna lake in Chandigarh, Srinagar’s Dal Lake, Lucknow in UP, Vijayawada in Andhra, Panchkula hospitals in Haryana and the Kalinga Institute of Medical Sciences in Bhubaneswar.

This was the third major display of gratitude to health workers across the country, following PM Modi’s request to countrymen to clap, ring bells and beat utensils to support the Covid-19 warriors from their balconies, and later by people switching off their lights and lighting candles and 'diya'.

The medical fraternity and other corona warriors were seen assembled outside the Covid hospitals and other government buildings putting hands on their chest to show honour to the respect to the efforts of armed forces. The gesture of expresssing thanks started with laying of flowers by the three Service Chiefs at the police memorial in Delhi in the morning to honour police personnel deployed for enforcement of the nationwide lockdown. Sukhoi-30 MKI, MiG-29 and Jaguars, Chetak did a flypast over Rajpath and circled over Delhi and showered petals over India Gate and Red Fort.

The petals were showered at Jalmahal in Rajasthan, Bada Talab in Madhya Pradesh, Hussain Sagar in Hyderabad, Vidhan Soudha in Karnataka; Vivekananda Rock and Secretariat in Kerala, and Sulur in Tamil Nadu.

Indian Navy personnel at INS Hansa in Goa expressed their appreciation by forming a 'human chain' and thanked the corona warriors in their unwavering commitment to fighting against the dreaded disease.

In addition, ICG 10 helicopters showered petals on COVID-19 hospitals at five locations in Daman, Mumbai, Goa, Chennai, Port Blair where total of 46 ships will appreciate appreciate the efforts of the COVID-19 warriors by illuminating the ships in the evening around 7 p.m. at 25 locations covering the entire coastline of the country including the remote sites and island territories of Andaman and Nicobar Islands, and Lakshadweep and Minicoy islands.