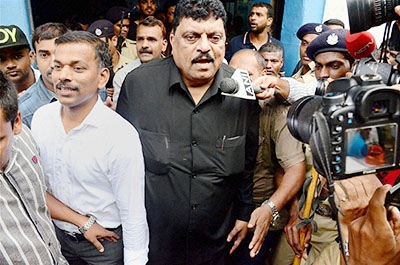 Panaji : Former PWD Minister Churchill Alemao has been arrested in connection with the Louis Berger bribery case by Goa police which is closing in on former Chief Minister Digambar Kamat and preparing to oppose his anticipatory bail plea.

Alemao, 66, who was taken into custody from Agassaim village in South Goa and later put under arrest around midnight by the Goa Police’s Crime Branch, claimed he was innocent and his arrest was ‘politically motivated,’ a charge rejected by Chief Minister Laxmikant Parsekar, heading the BJP-led Government in the state.

Parsekar said, “Police are doing a good job. No one would be spared”. Police claimed that Alemao was arrested on the basis of

“Alemao was arrested as we got clinching evidence against him after interrogating others accused who are arrested. We might need custodial interrogation of Kamat too,” a senior Crime Branch official said on condition of anonymity.

Kamat, who headed the previous Congress ministry, had earlier moved an anticipatory bail application in a Pananji court which will hear it today.