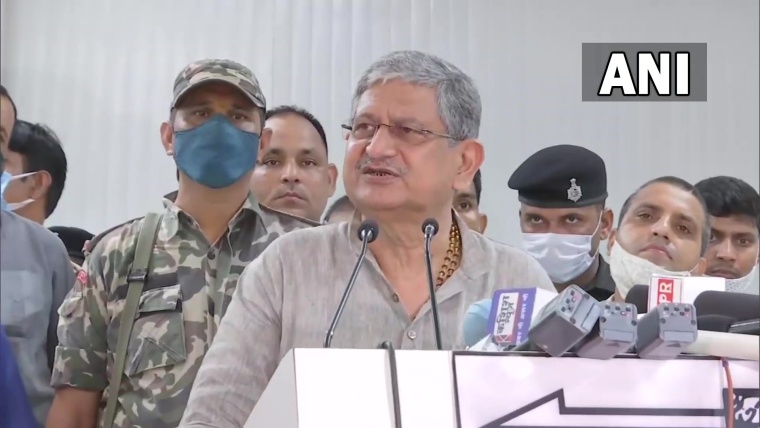 Bihar's ruling party Janta Dal - United's recently appointed president Rajiv Ranjan Singh said, "We aim to make JDU a national party." In this regards, the party president that he has held discussions with party leaders in Manipur and Uttar Pradesh.

"We'll hold discussions with NDA partners. If they don't make us a partner in these states, we will fight and win the elections alone," he added.

Rajiv Ranjan Singh also known as Lalan Singh was on July 29 replaced the union steel minister, R C P Singh as president of the national JDU. RCP proposed the name of Lallan Singh at the national executive committee of the JDU held in New Delhi.

Yesterday, Mr Singh announced that his party would contest the assembly elections in neighbouring Uttar Pradesh.

We aim to make JDU a national party. I've held discussions with party leaders in Manipur & UP. We'll hold discussions with NDA partners. If they don't make us a partner in these states, we will fight & win the elections alone: JDU President Rajiv Ranjan Singh pic.twitter.com/LX8yknXbSB

Mr Rajiv after his appointment last Sunday said he would consult his party colleagues on selecting candidates and constituencies. According to him, JDU had successfully contested elections in Manipur and Arunachal Pradesh too. JDU is a partner in NDA-led by BJP.

He is the first leader of party from upper caste to head the party. In the last assembly elections, upper castes, particularly Bhumihars (Lallan Singh's caste) had voted against JDU which was reduced to third position in the assembly.

No senior leader was present at the reception of Lalan on his maiden visit. Chief minister Nitish Kumar and JDU parliamentary board chairman Upendra Kushwaha could not come.

Notably, Lalan was upset for the last few weeks as he was denied a berth in the Union cabinet and RCP had taken oath ignoring the claim of Lalan Singh, member of Lok Sabha from Munger. He had been MLC, MLA and member of Rajya Sabha too. He was PWD and irrigation minister in Nitish Kumar led cabinet. Bihar: Lalan Singh to be new national president of JDU as RCP Singh steps down