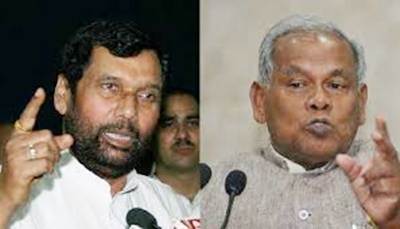 Patna : Close on the heels of LJP chief Ramvilas Paswan’s son-in-law rebelling against him, the son-in-law of Hindustani Awam Morcha (HAM) chief Jitan Ram Manjhi also went against him and filed nomination as an Independent candidate on Monday.

Devendra Manjhi said he had to enter the fray “under pressure from the Mahadalit samaj (community),” but bode no ill feeling against his father-in-law, former Chief Minister Jitan Ram Manjhi.

“Despite representing Dalit and Mahadalit samaj, he got only 20 seats. What more can he do?” Devendra said about his father-in-law, adding “I do not want to tarnish his image and will definitely seek his blessings.”

Devendra Manjhi, who used to live in the CM’s residence when Jitan Ram Manjhi was on the chair and played an active role in his political activities, said “I have support of my mother-in-law and others in the family.”

Sadhu, who headed the Dalit Sena and has been removed by the LJP, said he was thinking of entering into the fray from Raja Pakar (reserved SC seat) against Pashupati Kumar Paras,younger brother of Ramvilas Paswan and state LJP chief.

“I will field candidates from the Dalit samaj on all seats contested by the LJP and campaign to ensure defeat of Ramvilas Paswan’s party,” he added.