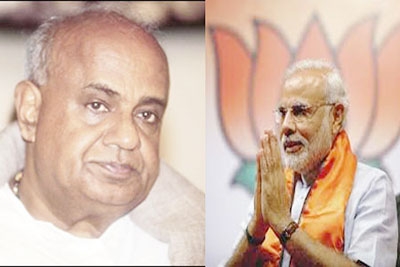 “My secretary got a call from the Prime Minister’s Office a few days back. The message was that Mr Modi wants to meet me … he has invited me for a cup of tea,” Gowda told here.

Asked for his reaction to the Prime Minister’s gesture, Gowda said it shows his good intentions to spend some time with ex-Prime Ministers.

“It shows his good intention to spend time with two former Prime Ministers – one is Manmohan and the other is me, who is a farmer,” he said.

The gesture also shows that Modi gives respect to former Prime Ministers, Gowda said….the way he tries to give respect, even though I was Prime Minister for only ten months, feels good,” he added.

“I am sorry some of the words he (Gandhi) expressed, I am not in favour of that. He is the Prime Minister of the nation, not of one political party – BJP. In my humble opinion, I always respect … We should not undermine the office of the Prime Minister,” he said.