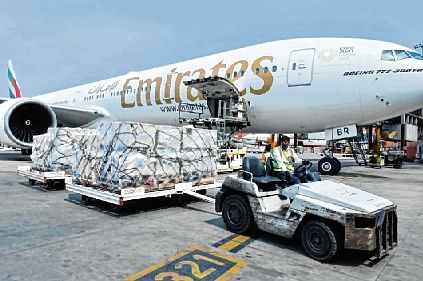 The US has so far sent six planes carrying emergency supplies to India, which is battling one of its worst public health crises.

The 6 planes, which have landed in just six days, also carried 550 mobile oxygen concentrators that obtain oxygen from ambient air.

The US has also sent nearly 2.5 million N95 masks to protect healthcare professionals and other frontline workers.

Indian-American Congresswoman Pramila Jayapal has said the US had a "moral responsibility" to help India in its fight to defeat the raging pandemic in the country. New coronavirus cases and deaths in India hit a record daily high on Thursday after 4,12,262 new infections and 3,980 fatalities were reported, taking the total tally to 2,10,77,410 and the death toll to 2,30,168.

"The situation in India is dire. Hundreds of thousands of new cases are confirmed every day, there are no hospital beds open or oxygen supply left, and people are tragically dying before they can even get to a doctor," Jayapal, the first and only Indian-American in the US House of Representatives, said.

In India, the UN team on the ground "continues to support the authorities - both nationally and locally - to tackle the pandemic," Stephane Dujarric, Spokesman for UN Secretary-General Antonio Guterres, said Thursday.

Switzerland, which has sent over 13 tonnes of medical supplies worth CHF 3 million (over Rs24 crore) to India to fight the crisis, on Friday asserted that the Swiss government stands with India in its hour of need. As India battles spiralling C-19 cases, Swiss companies have also pledged medical relief worth over CHF 7 million (over Rs 56 crore) and the first of several supplies is expected to reach the national capital by Saturday. Switzerland has sent 600 oxygen concentrators and 50 respirators to India. worth about CHF 3 million (over Rs 24 crore) to assist hospitals in India.

Swiss authorities will look into the issue of a temporary waiver of intellectual property on vaccines and then take a decision on the matter, Swiss Ambassador to India Dr. Ralf Heckner told ANI on Friday. He added that the main objective is to get vaccines to countries that are financially in a less privileged position than Switzerland.

Kuwait has sent 215 tonnes of liquid oxygen to India and it plans to supply up to 1,400 tonnes to help the country deal with an acute shortage of the life-saving gas in view of surging cases of coronavirus infections.

Kuwaiti ambassador Jasem Ibrahem Al Najem said 3 ships of Indian Navy and a commercial vessel are bringing 215 tonnes of liquid oxygen and large consignments of other medical supplies to India and the first shipment is likely to arrive Sunday. The ambassador said the government is committed to supply 1400 MT of liquid medical oxygen to India.