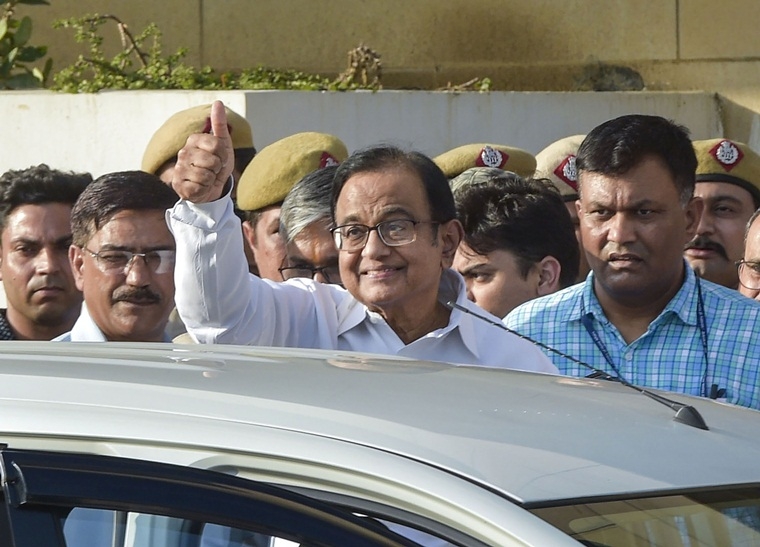 Senior Congress leader and former finance minister P Chidambaram was sent to Tihar jail on Thursday by a Delhi court where he will spend 14 days in judicial custody in connection with the INX Media corruption case. But before going to Tihar jail, while Chidambaram was in Central Bureau of Investigation (CBI) custody in connection with the INX Media case, he answered 450 questions during 90 hours of gruelling interrogation last week, reported NDTV.

Sources told NDTV, that most of the questions were related to the Foreign Investment Promotion Board (FIPB) clearances that the former Finance Minister allegedly secured for the company and his son Karti Chidambaram's alleged mail exchanges with the co-accused in the case. The sources further told the leading news channel that Chidambaram was confronted with five other accused and witnesses. He, however, was not confronted with D Subbarao, who was the FIPB chief when the INX media's proposal for foreign funds was cleared.

The week was quite long for former Finance Minister and senior Congress leader P. Chidambaram. On Monday, after a high-pitch legal drama, the Supreme Court refused him interim protection, asked him to seek interim bail from the trial court and ordered that he be not sent to Tihar. The apex court also extended his CBI custody till Thursday.

On Thursday, a trial court judge put an end to all by ordering that Chidambaram be sent to Tihar jail. Chidambaram's lawyers had begged against any adverse order before the Supreme Court on Monday in the INX Media case, registered by the Central Bureau of Investigation (CBI). On Tuesday and Wednesday, Chidambaram's lawyers argued in different courts to protect him from being sent to Tihar jail. On Thursday morning, the apex court declined anticipatory bail to Chidambaram in the matter being probed by the Directorate of Enforcement (ED), and later, the Congress leader withdrew the petition against the CBI custody.