34 years after its demolition, Tamil Nadu govt to install Karunanidhi's statue at same place in Chennai 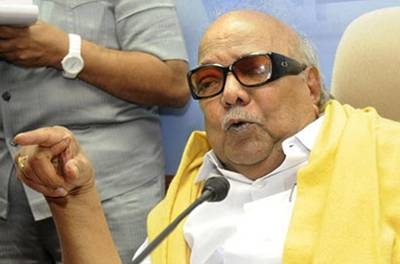 34 years after being demolished, Tamil Nadu govt to install Karunanidhi's statue at same place in Chennai |

Chennai: On the morning of December 24, 1987, as news of the passing of the legendary actor-turned-Tamil Nadu Chief Minister M G Ramachandran (popularly MGR) spread, supporters had gone on a rampage in the then Madras. While a section of the vandals had resorted to looting from showrooms on arterial Anna Salai, a young boy took a spear and demolished a statue of DMK president M Karunanidhi, which was erected in 1975 when he was Chief Minister.

The next morning Karunanidhi wrote in his party mouthpiece Murasoli that he was happy to note that the boy had hit the spear “on my chest, unlike some who stabbed me on the back.”

Now, 34 years later, his son and Chief Minister M K Stalin has announced that Karunanidhi’s statue would come up at the same spot where it once stood.

On Wednesday when a DMK MLA Neelamegam raised the issue in the Legislative Assembly and urged the Government to install Karunanidhi’s statue at the same place, Stalin responded in the affirmative. Incidentally there is a Supreme Court order prohibiting installing statues in public places and on roads. However, Stalin said a few days ago Dravidar Kazhagam founder Veeramani met him and said that since permission was obtained for installing the statue back then, no fresh permission would be needed.

Stalin said since there is statue of other Dravidian stalwarts on Anna Salai – Periyar E V Ramasamy, C N Annadurai and MGR – it would be appropriate to install Karunanidhi’s statue on the stretch. “The statue will certainly be installed,” he said. Legal experts would be consulted.

After Karunanidhi’s death in August 2018, a life-size statue of his was installed inside the DMK headquarters Anna Arivayalam, which is on the far end of Anna Salai.

A couple of years ago, Veeramani had recalled that Periyar wanted to install a statue for Karunanidhi in 1968 and again in 1971 but Karunanidhi had sidestepped it saying this could be considered once Periyar’s statue was installed. Eventually it was installed in 1975. The Dravidian Movement believed in installing statues for living persons to counter the practice of installing statues of departed leaders. Ironically, Veeramani had noted that on an earlier occasion when it was proposed to reinstall Karunanidhi’s statue at the same spot where it was demolished, it did not materialise as there was opposition from his family members and some DMK leaders (who felt it was a bad omen to install statue for a living leader). Hence it was given up then.