2022 UP Assembly polls to be held as scheduled with Covid protocols, all parties in favour: ECI

To avoid the crowd on the polling booths during covid, the commission has decided to extend polling by an hour in the coming assembly polls at UP.
Rashmi Sharma 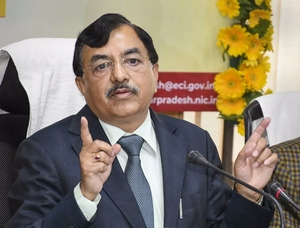 The Election Commission of India has indicated that the 2022 UP assembly polls would be held as per the schedule and there is no proposal of postponing it at present.

To avoid the crowd on the polling booths during covid, the commission has decided to extend polling by an hour in the coming assembly polls at UP.

The chief election commissioner (CEC) Susheel Chandra, who was in Uttar Pradesh along with other officials on a three-day visit, said all the political parties have desired that assembly polls be held on time.

While talking to media on Thursday, CEC said that all the parties have demanded that elections be held on time following the covid protocol. After reviewing the preparation of assembly polls for three days with the state officials, he said that the final voter list of UP would be released on January 5.

Around 52 per cent of new voters have been inducted and the number of females has also increased compared to the last elections. It may be mentioned that assembly polls in UP are due in the coming February and March.

The CEC said that a few of the political parties have raised the issue of violation of covid protocol during the rallies and demanded a ban on it. Serious concerns have been raised on the hate speech in rallies and paid news. The commission would look into all these complaints.

Chandra said that those above the age of 80 years and disabled would be allowed to cast their votes from home. The number of female polling staff at all the booths in UP would be increased. CEC added that there would be 800 polling booths in the state where only female staff will be deployed. EVMs and VVPAT are to be used in the entire polling process in UP and there would webcasting on one lakh polling booths in the state. The polling time in UP to be increased by an hour from 8 am till 6 pm.

The commission would keep an eye on the irregularities with the help of the VIGIL App and officials who have completed three years of service at a particular place would be transferred.

The candidates with a criminal past would apprise voters about cases against them through media, the CEC said.