'Friends' Reunion on May 27: Lady Gaga, BTS, Justin Bieber, and other celebs to make guest appearance on the show

Shoot for the reunion of the iconic show was supposed to happen last year, but the pandemic forced the unit to take a break.

Speculation about a "Friends" reunion surfaced when Schwimmer, Jennifer Aniston, Courteney Cox, Lisa Kudro, Matt Le Blanc and Perry - reunited in October 2019, and the moment was captured and shared on Instagram.

Shoot for the reunion of the iconic show was supposed to happen last year, but the pandemic forced the unit to take a break.

Now, after months of wait, the reunion is set to be aired on May 27, on HBO Max, and will feature a phenomenal line-up of celebs in attendance.

Keeping their fans on toes, the makers have also planned to include some original props, including the famous water fountain and original set.

The guest appearances will also include a few returnees such as Tom Selleck who essayed the role of Richard and Maggie Wheeler who played Janice.

The reunion confirmation news was spilt out by the co-star David Schwimmer, who told Andy Cohen in an interview aired early March that the cast and crew would begin production "in a little over a month." "I'm heading out to LA. So, finally, I mean, we figured out a way to film it safely, and there's going to be a portion of it that we film outside because of, you know, for safety protocols," he said at the time.

'Friends' that stars David Schwimmer, Jennifer Aniston, Courteney Cox, Lisa Kudrow, Matt LeBlanc, and Matthew Perry, in the lead roles originally aired for 10 seasons on NBC from 1994 to 2004. It followed the story of six friends in their 20s and 30s who live in Manhattan, New York City.

The American sitcom was touted as one of the most popular ones and is still the talk of the town among fans, who are eagerly waiting to see their favourite stars back together.

Read Also
'Friends reunion' to use original stage, fountain for the nostalgic sequel 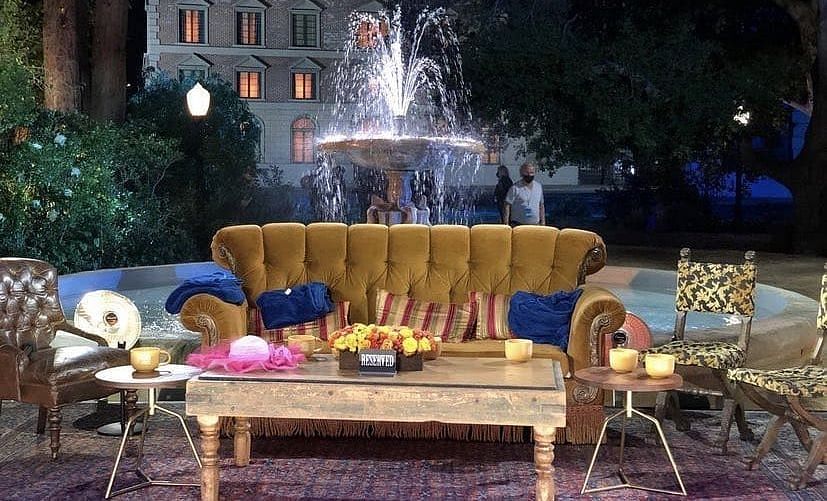 HomeEntertainmentHollywood'Friends' Reunion on May 27: Lady Gaga, BTS, Justin Bieber, and other celebs to make guest appearance on the show