Workaholism may lead to anxiety, depression 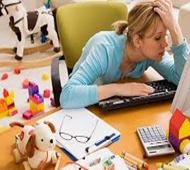 London: Workaholics, take note! You may be more prone to psychiatric symptoms such as depression and anxiety, researchers including one of Indian-origin have warned. Scientists examined the associations between workaholism and psychiatric disorders among 16,426 working adults. “Workaholics scored higher on all the psychiatric symptoms than non-workaholics,” said Cecilie Schou Andreassen from University of Bergen in Norway.

“Thus, taking work to the extreme may be a sign of deeper psychological or emotional issues,” said Andreassen. “Whether this reflects overlapping genetic vulnerabilities, disorders leading to workaholism or, conversely, workaholism causing such disorders, remain uncertain,” she said.

Researchers including Rajita Sinha from Yale University in the US used seven valid criteria when drawing the line between addictive and non-addictive behaviour.

Participants rated experiences occurring over the past year from 1 (never) to 5 (always).

The experiences were – you think of how you can free up more time to work, you spend much more time working than initially intended, you work in order to reduce feelings of guilt, anxiety, helplessness or depression, you have been told by others to cut down on work without listening to them. The other experiences included – you become stressed if you are prohibited from working, you deprioritise hobbies, leisure activities, and/or exercise because of your work, you work so much that it has negatively influenced your health. Scoring 4 (often) or 5 (always) on four or more criteria identify a workaholic, researchers said.

The findings were published in the journal PLoS ONE.