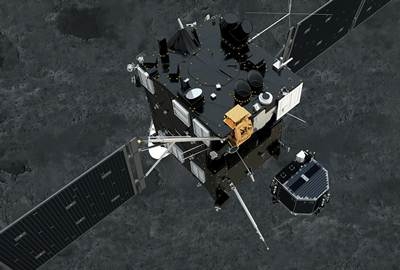 Washington : Scientists from the OSIRIS team have detected hints of ice in the neck of Rosetta’s comet 67P/Churyumov-Gerasimenko. The Hapi region on the neck of Rosetta’s comet 67P/Churyumov-Gerasimenko reflects red light less effectively than most other regions on the comet. It thus appears slightly blueish. The Hapi region is located between the comet’s two lobes and has in the past months proven to be particularly active and the source of spectacular jets of dust and gas.

Researchers are using images obtained with the color filters of Rosetta’s scientific imaging system to study the reflectivity properties of 67P’s surface. Their analyses confirm that the Hapi region is unique. Its bluish coloring might point to the presence of frozen water mixed intimately with the dust at the surface. When seen with the human eye, comet 67P/Churyumov-Gerasimenko is grey – all over. With its color filters Rosetta’s scientific imaging system OSIRIS, however, can discern tiny differences in reflectivity. To this effect, scientists from the OSIRIS team image the same region on the comet’s surface using different color filters. If, for example, the region appears especially bright in one of these images, it reflects light of this wavelength especially well.

OSIRIS Principal Investigator Holger Sierks from the Max Planck Institute for Solar System Research (MPS) in Germany said that even though the color variations on 67P’s surface are minute, they can give important clues. In a recent analysis, the Hapi region clearly stands out from the rest of the comet: while most parts of 67P display a slightly reddish reflectivity spectrum as is common for cometary nuclei and other primitive bodies, the reflection of red light is somewhat lower in this region. OSIRIS scientist Sonia Fornasier said that they know that the reflectivity properties are closely correlated to the surface morphology. Where the smooth surface of the Hapi region gives way to the more rugged terrain of the surrounding areas, the reflectivity, too, changes. The scientists believe that Hapi’s special reflectivity properties hint at a higher abundance of frozen water at or near the surface.