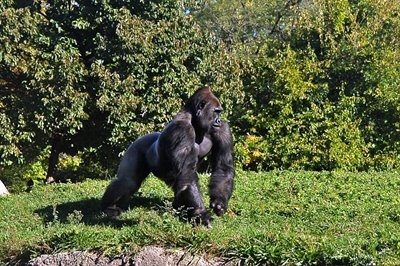 Previous research has found that groups M and N originated in geographically distinct chimpanzee communities in southern Cameroon, but the origins of groups O and P remained uncertain.The new study, published in the U.S. journal Proceedings of the National Academy of Sciences, conducted a comprehensive survey of simian immunodeficiency virus (SIV) infection in African gorillas.

“Viral sequencing revealed a high degree of genetic diversity among the different gorilla samples,” said co-author Professor Beatrice Hahn of Pennsylvania University in a statement. “Two of the gorilla virus lineages were particularly closely related to HIV-1 groups O and P. This told us that these two groups originated in western lowland gorillas.”

Martine Peeters of the University of Montpellier in France, who led the study, said the finding is critical to gauge future human infection risks. “From this study and others that our team has conducted in the past it has become clear that both chimpanzees and gorillas harbour viruses that are capable of crossing the species barrier to humans and have the potential to cause major disease outbreaks,” Peeters added.

HIV-1’s four known groups have had very different outcomes in humans. Group M gave rise to the AIDS pandemic, infecting more than 40 million people worldwide by spreading across Africa and throughout the rest of the world. Groups N and P, at the other extreme, have only been found in a few individuals from Cameroon. But group O, although not as widespread and prevalent as group M, has nonetheless infected about 100,000 people in Africa. Another virus type, called HIV-2, also causes AIDS, but is endemic only in West Africa.