Flawed Gene Explains Why Flu Can Kill In Rare Cases 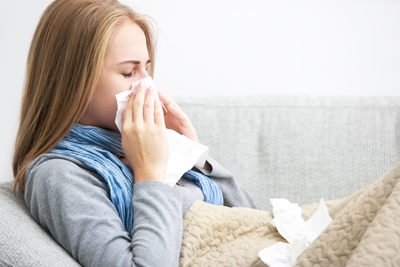 This Is The First Example Of A Common, Isolated And Life-Threatening Infection Of Childhood That Is Shown To Be Also A  Genetic Disease

New York : While most people affected by the flu recover easily, children with a rare genetic mutation may fall so ill that they could end up in the hospital and even lose the battle against the influenza virus, suggests a new study, reports IANS.

Mutation in the gene IRF7 could prevent children from producing a protein that helps fight off the virus, showed the findings published in the journal Science.

The researchers from the Rockefeller University scrutinised blood and tissue samples from a young girl who, at the age of two-and-half, developed acute respiratory distress syndrome after catching the flu, and ended up fighting for her life in hospital.

Years after her ordeal, which she survived, scientists led by professor Jean-Laurent Casanova discovered that it could be explained by a rare mutation she carries that prevented her from producing a protein, interferon, that helps fight off the virus.

“This is the first example of a common, isolated and life-threatening infection of childhood that is shown to be also a genetic disease,” said Casanova.

The researchers sequenced all genes in the genomes of the young girl who survived her dangerous bout of the flu and her parents, looking for mutations that might explain her vulnerability. Knowing how rare her reaction to the flu was, they narrowed their search to mutations that were unique to her, then focused only on those that affected the immune system.

What emerged from their work was the finding that the girl had inherited two differently mutated copies of the gene IRF7, which encodes a protein that amplifies the production of interferon. The researchers have also developed a new treatment option for children who mysteriously develop severe cases of the flu.